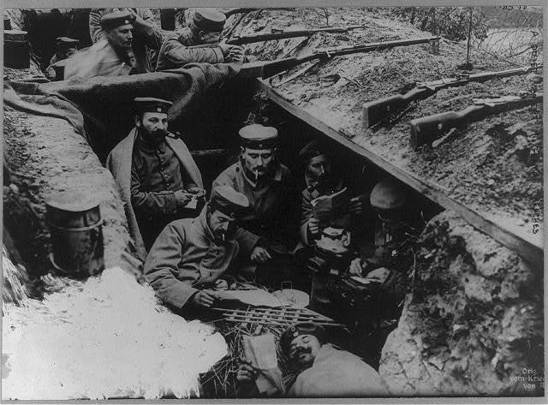 "Christmas in the Trenches 1915": Flushed with joy having contributed to the tide of peace and goodwill that washes around during this special time. YouTube

It happens nearly every night I go out for an evening at this gentle season of the year.

Often I am in pubs or clubs where I am not known, just another passing stranger of the night, a small bearded man enjoying his meal or drink in the corner. And I suppose it is because I will always stop in an establishment where there is music and song and dance that the chances of it happening again are high.

And then I am flushed quietly with pride and joy and a genuine sensation of having contributed to the tide of peace and goodwill that washes around almost all of us during these special days and nights.

I am referring to the singing of my Christmas song about the unique truce which happened a century ago on the bleeding and blasted and gory front lines of the Great War of 1914-1918 in which so many young Irishmen died alongside their brethren on both edges of No Mans Land. That soldiers' simple truce is part of history.

Most of you know all about it. On Christmas Day, it is said that a German soldier began to sing his version of "Silent Night,” that glorious hymn, and then all the war was forgotten as the troops left their trenches, fraternized, played a game of soccer across No Man's Land, and stole some few hours of peace away before the guns began booming with increased ferocity the following dawn.

Let me say straight away that, though I practice this prose trade, I am not a songwriter or musician like my brother Mickie MacConnell. But I have tried my hand at it, and in all fairness, have produced a few dozen dreadful maudlin songs and ballads.

I am ashamed of almost all of those and wince when I hear any poor pub session singer attempting to make them sound half-decent.

But, equally, I am more proud of my “Christmas in the Trenches 1915” than anything else I have written in my entire life. It came from some creative place that I will never ever get to again. It was a gift of some kind from Above.

And it is fair to say that since the lovely Clare tenor Jerry Lynch first recorded it more than 20 years ago now, it has become one of the Irish Christmas classics on the airwaves, in the concert halls and, where I most love to hear it, in the sing-along pub sessions.

Google it if you have never heard it. There are many versions you can hear on the net, not just Jerry Lynch's which is my favorite, but also from such as Daniel O'Donnell, Brian Kennedy, Tommy Fleming, and many more.

They begin the radio plays here in Ireland from the first week of December. It is played very often across the national airwaves, and sometimes I switch on the radio and hear it by accident.

That is heartwarming, but it gives me nowhere near the same deep joy of spirit as hearing a song I wrote about the beauty of peace and goodwill, and the savage futility of war, being sung by an ordinary spontaneous bar singer in a singsong.

The singer is usually male, but sometimes I have heard female versions too, and all thrill me to the marrow of my old bones. It is even more special nowadays that other listeners now know the chorus and join in that.

I sit quietly overflowing with peace and goodwill and pride, for sure, when it happens. It happened again earlier this evening in Ciaran's country pub in Ennis.

I had watched a grainy documentary on RTÉ the evening the song came to me. It dealt with the truce.

I was in low spirits because the mother of my children had died far too young only months before and I was hurting. Something moved me to get a notebook when the program ended, and the words just flowed out freely on to the page.

The air came simultaneously in an eerie way that never happened before or, sadly, since. In an hour I was walking up and down the sitting room singing it softly.

Weeks later when I was called upon to sing in my Galway pub the Crane, I was brave enough to sing it in public for the first time. It was about six weeks before Christmas. You could hear a pin drop even though my singing voice is not the best.

But there was a German group in the bar, middle-aged men, and I saw tears running down their faces as I sang, and I then knew I had a song to be proud of. They came up and hugged me when I finished the last line...."Sleep in Heavenly Peace."

And that's my Christmas story for you all as I blend it with the warmest and sincerest of seasonal greetings to each and every man, woman, and child under the roof.