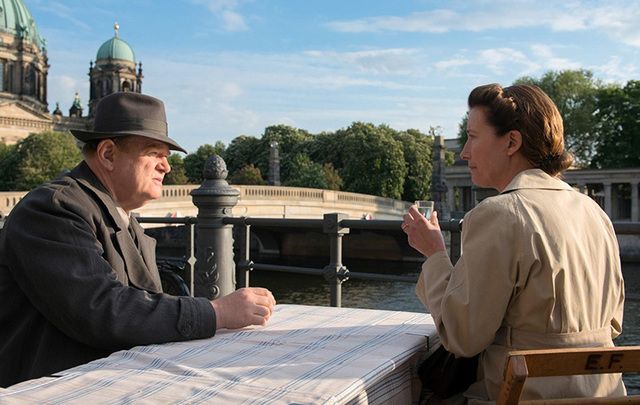 Brendan Gleeson and Emma Thompson in Alone in Berlin.

In Alone in Berlin Brendan Gleeson and Emma Thompson play a heroic married couple secretly resisting Hitler and the Nazis. It’s a tense wartime thriller that’s based on real life events. Cahir O'Doherty reviews the new film and finds its message timely as ever.

Truth is usually the first casualty of fascism. During Hitler’s rise to power his first order of business was to attack the press relentlessly. Then when he finally attained power he muzzled it immediately.

It’s because he understood when you silence the press you silence dissent. You take away the people’s power to call the powerful to account. Wherever you see crowds baying for an end to press freedom, you can set your thermometer for fascism.

Alone in Berlin is Brendan Gleeson’s latest film, and it’s a stark reminder of what can happen when people are intimidated into silence by the powers that be.

Based on the true story of Otto and Elise Hampel, the film follows a middle aged married couple radicalized by their young son’s death on the western front. A soldier in Hitler’s army, he’s shot dead in 1940 just as German optimism about their military victories is still at its height.

As Berliners celebrate the fall of France, the war is in a real sense already over for the Hampels, and it has ended in defeat. They live for their son, and now that he’s gone so has their reason for living they feel.

From its first frame, the subject matter of Alone in Berlin is an opportunity for Gleeson to play to his main strengths as an actor. In contrast to Thompson’s anxious Elise, his Otto is introverted, quiet and watchful. In fact Gleeson manages to convey in one glace what the death of his only son has cost his character, and he does so entirely without sentiment.

That death is a cold water to the face moment that reveals to him the scale of the horror that has descended on Germany. But the point is really brought home when an elderly female neighbor is revealed to be Jewish and is quickly targeted by the police.

Knowing what awaits her, she steps off a ledge to her death rather than be handed over to the Gestapo. It’s a moment of real life horror that is underscored by the amoral neighbor who steps out to steal her silver bracelet before the authorities arrive to carry away her body.

This is dark material, in other words, and it’s taken directly from real life. Alone in Berlin reminds us just how quickly and completely societies can break down and once they start to, how dangerous it becomes to step out of line.

Seeking revenge for their loss, and pointing the finger where it belongs, Otto begins to leave anonymous cards criticizing Hitler and the Nazis at popular meeting points in the city where he is certain they will be discovered.

“I’m writing cards that tell the truth,” says Otto. “People will read these cards and pass them on.”

Writing these criticisms amounts to treason and will result in a death penalty, but Otto is resolved to be the sand in the gear of the war machine. One or two grains may not mean much, but added up over time they have the power to make the machine stop he says.

In the role of Elise, Thompson reminds us why she’s an Oscar winner. Initially skeptical of her husband’s efforts, she quickly begins to accompany him on his handwritten propaganda missions to handpicked sites around Berlin.

For Elise, the danger of what they are doing is always foremost on her mind. Unlike her heartbroken husband, she still feels she has a reason to live.

Sure enough their two-person resistance movement is being closely monitored by secret police officer Escherich (Daniel Brühl) who becomes obsessed with capturing the still unknown perpetrators.

“Mother, the Fuehrer murdered my son, he will murder your son too,” reads one of the cards. It’s a heartfelt confession but it’s also a slip up, because it reveals that whoever has written it has recently lost a son, and perhaps an only son, which gives the police something to work with.

Escherich reports to his superiors in the SS who are much less forgiving of the time it’s taking to bring the secret propagandists to light. In the scenes between Escherich and the SS we witness the real reign of terror that Nazism represents, because its top down power structure bullies everyone who finds themselves on the lower social rungs.

As the film opens the marriage between Otto and Elise looks like it has run aground, without physical or emotional connection. But their secret mission and the danger that surrounds it unexpectedly reawakens their passion and brings them closer than they ever dreamed.

It’s a necessary touch in a film that feels relentlessly doom laden and dark.  Scene after scene is filmed in washed out colors, muted tones. Only the bright red of the swastikas and the gold of the Hitler youth shirts are allowed to break though the drab color palette.

As Otto, Gleeson is dependably terrific as is Thompson, but the director has made the odd choice of making them speak in German accented English, which is a movie tradition that really should have ended around the time of Gone With the Wind.

Brendan Gleeson and Emma Thompson in Alone in Berlin.

Although Gleeson and Thompson never arrive at the “we haff ways of making yoo talk” school of comedy German, it’s still an odd choice that makes you focus on the words and not the characters each time they open their mouths.

Choices like this allow audiences to tune out because they can think of a hundred previous examples.  It’s a bit of a waste of the actors’ talents too, because these are world-class performers who deserve to be given all the scope they need. We would have accepted standard English accents and focused on the story, had the director allowed us to.

So if Alone in Berlin doesn’t have the emotional sweep of Gleeson’s longtime collaborator Liam Neeson’s film Schindler's List for example, it is nevertheless a compelling portrait of two people deciding to do their best to resist tyranny, which is a message that has resonance in our own time.

Where the film falters is in the at times plodding pace and direction. The script and the director keep us at a remove from Otto and Elise, leaving Thompson to do much of the heavy lifting when it comes to the film’s emotional content.

But Gleeson can do more with once glance that most of his acting peers have managed in a lifetime. It has to be said he’s the most gifted Irish actor of his generation, and it’s to be hoped that he’ll find material and directors that are more equal to his talent.

Alone in Berlin is a convincing but ultimately rather slight telling of a truly remarkable act of courage. To live in the center of Nazi Germany and to fight it with all the means available to you is a story that should be told and told well. This film manages the former but not the latter part.

Read more: My family's Holocaust story recalled for the Irish