It’s a time for Ireland to take a hard look at its past and its future, and in Boston’s brilliantly curated Irish Film Festival that timely goal has been met 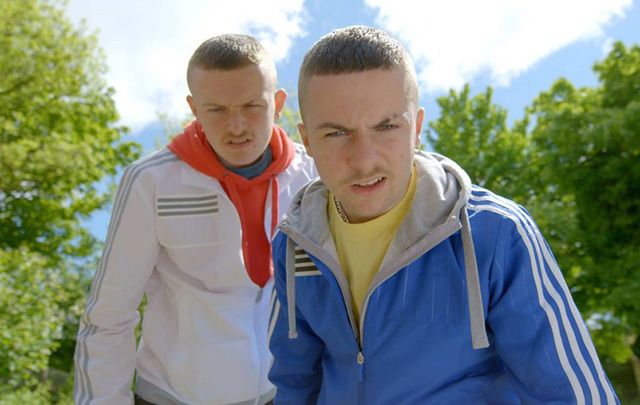 Chris Wallace and Alex Murphy in The Young Offenders.

It’s a time for Ireland to take a hard look at its past and its future, and in Boston’s brilliantly curated Irish Film Festival that timely goal has been met. Cahir O’Doherty talks to festival director Dawn Morrissey about the programming.

When you think about the population of Ireland, it’s pretty amazing to realize the country produces about 20 new feature films a year and dozens of shorts, being such a small country.

It’s exceptional actually. “We get about 200 films submitted each year over all between shorts and features,” the director of the Irish Film Festival in Boston, Dawn Morrissey, tells the Irish Voice, ahead of this year’s four day celebration which runs from March 23-26.

Starting with one of the most buzzed about new features out of Ireland this year, Young Offenders, the film tells the incredible true story of Ireland's biggest cocaine seizure in 2007, turning into a comic road movie about best friends Conor and Jock, two inner-city messers from Cork along the way.

The lads are quick to seize their big chance for the big bucks when a drug-trafficking boat capsizes off the coast leaving 61 bales of cocaine, each worth €7 million, ripe for the taking.

Stealing two bikes, they set off to find a missing bale which they hope to sell to escape their troubled home lives. “This was a film that we really wanted to screen at the festival and we were lucky enough to get them to submit it,” says Morrissey.

Having a new Irish film this funny and this well made to open the festival delights her. “It’s a road movie on bicycles and it draws from a real story in Ireland. With its gorgeous West Cork scenery it does Ireland’s tourism a world of good too,” Morrissey says.

The second film on opening night is Gridlock starring Moe Dunford. When a little girl goes missing from one of the cars stuck in a traffic jam on an Irish boreen, her father forms a desperate search party to find her, and soon everyone is a suspect.

“It has a big twist to it you will not see coming,” says Morrissey, who hopes to get Dunford to attend the screening.

Hailing from Kildare, Morrissey came to the U.S. in 1995 where she met her American husband and eventually settled in Cambridge outside Boston in 1997. Along the way she’s worked on several major films in Ireland including the award winning In the Name of the Father.

After studying at Emerson College (film) she met Peter Flynn, the founding member of the Irish Film Festival in Boston. Working with him for several years as a producer, after he decided he wanted to make films rather than curate the festival, she took over in 2010 as director.

“In the festival in general we try to present contemporary Ireland,” she explains. “We try to show American audiences what the real Ireland is all about. A lot of people romanticize the place but not us. But the films coming out of Ireland now are global cinema.”

Day two of the festival includes the U.S. premiere of another buzzed about gem, A Date for Mad Mary. “It has a lot of themes,” says Morrissey. “On the surface it’s a fun piece about a girl who’s trying to get a date to attend her friend’s wedding. But there’s so much more to it. Young as she is, she’s been in prison already, there’s been violence in her background, she’s been a violent offender and as we meet her she’s still discovering who she is.” Element, which produced the film, were the group behind other Irish hits Calvary and Once.

The film screens alongside the short Terminal, a particularly hard-hitting film about the ordeal Ireland puts women through when they want an abortion.

In the film a teenage girl and a woman meet in an airport departure gate before they board a plane to Manchester, where they share the different reasons that brought them to this moment, and the journey ahead of them.

“It’s a great film that juxtaposes the experience of a 16-year-old girl with a woman who’s in her early thirties in a really poignant film, one that grapples with what it means to be pro-choice,” Morrissey says.

Mattress Men on day three of the festival is the brilliantly told story of the eccentric Irish mattress mover Michael Flynn, as he reinvents himself as a bed salesman during the height of Ireland’s recent recession and becomes an overnight celebrity. Under the guidance of his good friend Paul Kelly the business starts to grow, until rows and differences of opinion see their friendship begin to implode.

The festival will also feature Rocky Ros Muc, which is the world premiere of a film shot in Boston about the boxer Sean Mannion who left Galway for Boston, where his sparing partners at his gym were at the heart of Whitey Bulger’s Winter Hill gang. His friends were fellow Irish emigrants and he knew about their world of drugs, racketeering and murder. Rocky Ros Muc tells his story and even Boston Mayor Marty Walsh appears.

“We are touching on the local flair and that screening is already selling out,” Morrissey says.

Out of Innocence stars the award winning Fiona Shaw in a startlingly powerful drama about a young woman accused of murder after she secretly gives birth to a stillborn child. “It’s based on a well-known story in Ireland (the Kerry baby case) and you may want to throw something at the screen because this poor woman is being brought to court for a crime she never committed. It’s a reminder of how far we’ve come and how far we haven’t,” Morrissey says.

If you’re noticing that there’s a quietly feminist point of view curating some of the festivals hardest hitting selections it’s because the majority of the schedulers are women, Morrissey says.

On a lighter note the festival will also screen Revolutions, a documentary on Ireland’s little known all-female roller derby scene (who knew it had one?). An outlet for young women in an economically hard hit nation, it’s about expressing yourself and finding your squad.

“It’s a great documentary about two teams from Cork and Dublin and what they went through to realize their dreams,” says Morrissey.

On Sunday, the fourth and final day of the festival, there’s a remarkably diverse program that includes the acclaimed documentary Bobby Sands, 66 Days as well as Paddy Moloney: Chieftain, about the legendary Irish traditional musician.

The festival will also present, in association with Gaze International Film Festival Dublin, a series of brilliant LGBT Irish short films including director Graham Cantwell’s Lily, about a young Dublin woman facing the greatest challenge of her life to date in school and finding out who she is and where she’s going in the process.

James Doherty’s Breath also looks at the life of a young Traveler who’s father can’t accept he’s not the knockabout kid he once was himself. Starring Love/Hate’s gifted John Connors, it’s a reminder of just how complex the Emerald Isle actually is and this festival is one of the best illustrations to have emerged to date.