Gloriously ambitious new telling of the last troubled year in the life of the father of modern art, Vincent van Gogh, is entirely painted. 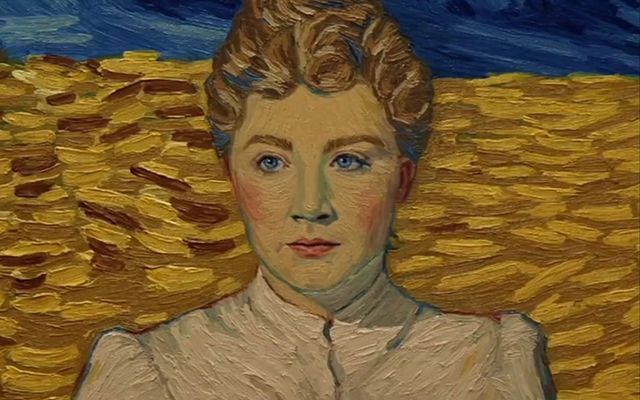 Saoirse Ronan as the mysterious Marguerite Gachet in Loving Vincent.

Saoirse Ronan, Chris O’Dowd and Aidan Turner all star in a gloriously ambitious new telling of the last troubled year in the life of the father of modern art, Vincent van Gogh. There have been many films that have explored the artist’s final days, but none have immersed themselves so completely in his art and vision with the seamlessness of Loving Vincent. Cahir O'Doherty reviews the new film.

The artist Vincent van Gogh lived every one of his 37 years as though auditioning for the part of the Great Artist. Brilliant, enigmatic, tender, and blessed and cursed with a weird light in his eyes that alienated more people than it drew close, he was the complete picture, a lightning-struck outsider.

There have been many films made about van Gogh’s famously tortured life, the majority of them unabashedly romantic and adoring, but Loving Vincent, which opens on Friday, isn’t typical of the usual approach at all.

For a start, every frame of the film has been hand painted in oils.  You read that right. Live action actors have been delicately hand painted within each frame of the film, in a painstaking but utterly beautiful process that ensures complete immersion in the Dutch artist’s world-changing vision.

Saoirse Ronan, Chris O’Dowd and Aidan Turner have all signed up for this remarkable and slightly bonkers project, understanding that it would transform their performances into moving artworks. If that seems like an unusual decision for three Irish screen actors at the top of their game, things become much clearer when they appear in their respective roles.

Ronan, 23, plays Marguerite Gachet, the quietly mysterious young daughter of van Gogh’s famous friend and doctor.  Unlike almost everyone else in van Gogh’s orbit, Marguerite knows the Dutchman is a genius from the moment she first meets him. But before we learn what her secret motivations are, she is subjected to a cross examination by Armand Roulin (Douglas Booth), the young man who has come to trace the tortured artists final footsteps.

Before you even get to the story, however, there is the alternatively exhilarating and disorientating experience of being thrown into the oil painted world of the film itself.

Loving Vincent is often rapturously beautiful to look at, reflecting the work of the painter who is rightly credited the father of modern art.  Many of van Gogh’s most famous paintings come to life in the film, taking on new dimensions and forms and at times almost leaping from the screen.

Paintings like The Night Cafe, Wheatfield with Crows and Starry Night Over the Rhone are no longer just images the film reminds us; over time they have been become corner stones of civilization itself, foundational examples of what it means to be human.

In Loving Vincent these city streets, passing people, open fields and starry skies all become both real and representational at the same time, exactly the way they do in van Gogh’s work, allowing us to see just a little of what the artist himself did, by refracting light and form through his world altering genius.

The film plays out like a detective investigation with, it has to be said, sometimes varying results.  Armand, the son of kindly old walrus bearded Postmaster Roulin (O’Dowd) is sent off by his worried father to find out what happened to the troubled artist.  Giving Armand a letter from Vincent’s brother Theo to be delivered to the painter, both men are unaware of the fate that has befallen the addressee.

Their interest is more than professional. Both men have previously sat for van Gogh and both have liked him, making their quest to unravel the truth behind his unexpected disappearance even more personal.

Armand’s halting investigation eventually takes him to Arles, the southern French city where van Gogh made his greatest artistic breakthroughs, and from there on to Auvers-sur-Oise (the scene of the painters untimely death).

When Armand finally discovers that the missing man he had hoped to meet and deliver the letter to is dead, the question he asks is the question that we come to ask too: how does a man go from being calm and contended to utterly suicidal in just six short weeks?

Although the detective set up is familiar and even a little hackneyed, the questions that Loving Vincent asks are anything but. To exist is very mysterious, the film reminds us. What happens after we stop existing is equally strange.

As Armand struggles alone to piece together what has happened to poor Vincent his search leads him to the local boatman (Turner), who knows everything that goes on in the secretive French town where he met his fate and who isn’t for a moment fooled by the fine manners of the upper classes.

Turner’s boatman explains that Vincent was lonely, vulnerable and an easy set up for the local toughs who wanted to make sport of him. Which, he says, is what led to his end. A squabble turned deadly might have been the root cause, he suggests.

But it’s Ronan’s Marguerite who seems to hold the real key to the shocking suicide. Every day Marguerite takes flowers to the artist’s grave in a gesture that could be interpreted as romantic, or perhaps undertaken to assuage her own hidden guilt in his downfall?

The closer Armand gets to the truth, the more elusive it seems to become, though. Did Vincent have a romantic entanglement with young Marguerite, and did that enrage her overprotective father, Vincent’s doctor? Was his death even a suicide, or did he die at the hands of some of the rough-hewn locals, who had no time at all for his unusual character or his artistic gifts?

As the mystery deepens we are guided literally right through some of the greatest masterworks of modern art, and the exchange between the image and the events that inspired it can be both illuminating and unsettling at the same time.

Double Oscar nominee Ronan has already come into her own as a major screen actress and so it’s no surprise that she owns the most pivotal scenes in the film, including a memorable scene where she gently upbraids Armand and us for our own narrowness, reminding us that what is true for ordinary men may not be true for genius.

What does it matter how he died, or what led to it -- he’s gone, she says. We have his works and they explain who he was and what he saw and they are enough. In focusing on the details we have missed the big picture.

It took 125 painters, 62,450 paintings and almost a decade for writer-directors Dorota Kobiela and Hugh Welchman to complete Loving Vincent, and you can see the result of their all-consuming obsession in every frame.

Loving Vincent is the first feature-length animated film to be made entirely of oil paintings on canvas, and each frame is an homage to its elusive subject and his remarkable work.

It is interesting that three of the top Irish actors in the world were drawn to this project. Ireland has an international standing in every one of the arts, but Irish involvement in painting is still criminally underrepresented. That why’s it’s both exciting and inspirational to see Irish artists firmly claiming this frontier in a film inspired by the greatest modern artist of them all.