Just five months before his assassination in Dallas, the President made his historic trip to Ireland. It was the turning point in Irish American history. 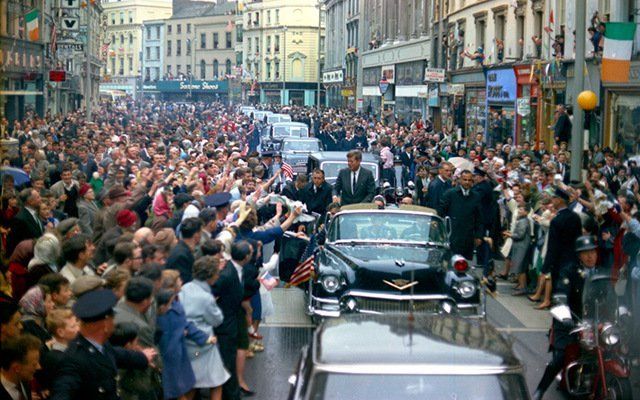 On this week in June 1963, just five months before his assassination in Dallas, President John F. Kennedy made his historic trip to Ireland.

It was the turning point in Irish American history, one that ended the No Irish Need Apply era and begun the new concept of a vibrant, successful Irish America.

When he stepped off the plane in Dublin he was met by the American-born Irish President Eamon de Valera, whose life story inspired Kennedy in his own political life. De Valera could hardly have guessed a few short months later he would be attending Kennedy’s funeral.

As for Kennedy himself, his visit to Ireland was the moment the modern Ireland was launched and a previously insular society slowly began to open up.

The Irish could hardly believe their luck, as the most charismatic man on earth spent five days in Ireland feted everywhere, injecting a Technicolor aspect into a previous dreary black and white story of Ireland.

The sudden pride in Irish heritage translated across the Atlantic too. It all culminated in 1980 with the U.S. census revealing that 40 million Irish Americans were counted in the census. A new Irish America was born.

The impact of JFK has counted to this very day in the U.S. as his style is widely aped by aspiring politicians, all keen for the comparison to be made.

On his last night in Ireland Kennedy was the guest of de Valera and his wife Sinéad. Sinéad de Valera was an accomplished Irish writer, folklorist, and poet.  During the evening she recited a poem of exile for the young president who was so impressed that he wrote it down on his place card.

Over breakfast the next day, JFK memorized the poem and recited it on his last speech at Shannon as he departed.

Then he said, “Well, I am going to come back and see Old Shannon’s face again, and I am taking, as I go back to America, all of you with me.”

That he did, and he has never left the Irish imagination since or ever. He was the Sunday in every week as far as the Irish were concerned, a virtual deity.

Of course, he would never return to Ireland, struck down by an assassin’s bullet 54 years ago.

Yet, with each passing president the JFK legend seems to grow larger.

His popularity in America in the summer of 1963, just two and a half years into his presidency, seemed to make him a certainty for re-election. When he took his Irish trip, his approval rating was at an incredible 82 percent (Donald Trump is 38 percent at the moment), surpassing any president in history in a non-war situation.

Kennedy was growing in stature, having faced down the Russians over Cuba, promising a man on the Moon by 1970, and completing an amazing trip to Berlin where his speech “Ich Bin Ein Berliner” inspired a generation of separated Germans to come together again some 25 years later.

Yet we will never know the full measure of the man. Two of his closest associates, Dave Powers and Kenneth O’Donnell, wrote a biography of

Kennedy and entitled Johnny We Hardly Knew You.

He would never see Old Shannon’s face again, but also he would never be forgotten by those who witnessed his visit.

The emigrant and exile had returned home to a tiny country that revered and loved him.

He was their stepping stone to the 21st century, but his own dreams died just months later.  His memory lives on.