A perfect family weekend along the Wild Atlantic Way

"Real jewels along the Way, some of them in places that are so small and compact that a stranger would be likely to drive through." 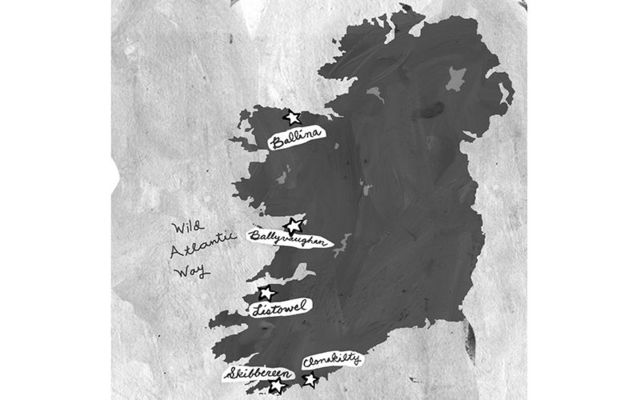 A family trip along the Wild Atlantic Way is as ever heart warming. Caty Bartholomew

"Real jewels along the Way, some of them in places that are so small and compact that a stranger would be likely to drive through."

I was at a mighty family wedding in Ballina in Co. Mayo last week. It was a heartwarming gathering as always.

Again, as so often before at such events, the second day after the wedding proper was the most enjoyable of the two. No speeches had to be made, the two families involved intermingled warmly as an Offaly guitarist and vocalist played suitable tunes in the background and, best of all, when he had earned his pay for the day and packed up, a spontaneous singsong instantly began that lasted for hours in the splendid Belleek Castle venue just outside Ballina and later transferred itself to two splendid singing pubs in the town center.

I will name them too because if any of you lot find yourselves in Ballina anytime soon they are well worth a visit. One was called Rouse’s, presided over on the day by a lovely young woman called Fiona, the third generation of her family in the trade. The other was aptly called The Shebeen, only a short walk away, and there must have been 200 ballads and songs sang in them before the wedding singsong finally reluctantly surrendered to the passing hours. I have had a smile pasted across my old face ever since.

Ye are well aware by now that this region of Ireland along the Atlantic surf line is being marketed to our tourists as the Wild Atlantic Way and, yes, beyond a doubt, things are different and dramatically so all along the west coast from Donegal all the way down to Kerry and West Cork.

Our singsong at the wedding, for example, was far more full-blooded and rousing and lively than an equivalent event in the Midlands. They are more restrained and maybe more canny in many areas of those Midlands far from the sea.

Fair play to them for that too. They know that the workload of tomorrow that we forget about is closer than one would wish. A different mindset.

Read more: Four Irish lads are rowing all the way across the Atlantic for the best reason

However, since I have already mentioned two good singing pubs along the Wild Atlantic Way, and since I’ve noted down the years that many of you readers are stone mad altogether for lists of places worth stopping in when on vacation, I think I will continue this piece by mentioning a few real jewels along the Way, some of them in places that are so small and compact that a stranger would be likely to drive through them without even noticing they are there.

Starting away down in West Cork, which is a lively cosmopolitan region nowadays, can I recommend to ye the towns of Clonakilty and Skibbereen.  If you are anywhere close at all do not miss either of them.

If you stop for a coffee or a meal or a drink be warned that you are likely to be so captivated by the atmosphere and the craic that you will be lucky to break free inside three or four days.  But those days, I guarantee, will be among the best of your trip especially, if, like many in the diaspora, you have Cork blood in your veins.

If you are on a schedule, and do break free of West Cork, then be warned again that you will have the same problem in Ballybunion in Kerry.  It will be the same story, especially if you walk through the welcoming door of the establishment called McMunn’s there. I’ve had such good times there down the years that I’m tempted to get back down again this weekend even though we have a storm here at present, with snow falling and slippery roads.

And the proximity of Ballybunion and the general topography are highly likely to tempt ye to head for nearby Listowel for a few hours more. Be warned again, very strongly, that you will have a problem leaving Listowel for several days at least, especially if you drop into the fabled pub of John B. Keane.

It is now presided over by his son Billy Keane, as good a writer as his father ever was, and the bearded musician in the corner behind a guitar that is bigger than himself is my younger brother Mickey the songwriter and entertainer whose works include “Only Our Rivers Run Free.”  Get involved in a session with those lads and their cronies and your schedule for the rest of the week is shot to bits.

If you do manage to reach Clare finally, across the ferry, there are so many hugely enjoyable attractions along that section of the Wild Atlantic Way that I cannot list them all or even try. However, in an effort to get you closer to my beloved Galway, I will single out the small town of Ballyvaughan, close to Black Head on Galway Bay.

Here, in many establishments, you will encounter maybe the friendliest and wittiest folk all along the Way and quickly discover that the stranger you met five minutes ago in Monk’s bar and eatery has two brothers and a sister living for years in either Boston or New York.

Now, since I am still recovering from the wedding in Mayo, and since we have traveled a long distance along the Wild Atlantic Way already by Irish standards, forgive me for taking a break here in Ballyvaughan if I promise faithfully to bring ye further up the Way next week along the enchanting Galway coastline. All those highlands and islands await us.

Can I now walk out the door, walk across the Shannon five minutes away into Tipperary, and have a pint in a pub called O’Riains in the other Ballina where, again, there is certain to be a singsong tonight? I’ll assume ye have given me that permission...