The Irish Embassy in London have been in contact and she’s said to be “recovering well” in hospital. 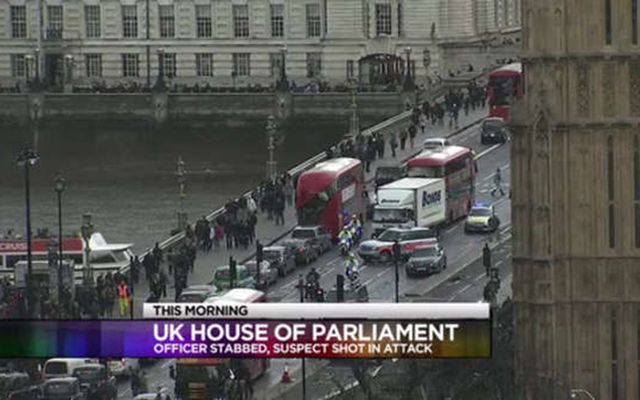 One Irish victim among those injured in the terror attack in London. Screengrab

An as yet unnamed Irish person is said to be “recovering well” in a London hospital after Wednesday’s terrorist attack.

In total at least 40 people were injured and four have died as a consequence of the attack. Witnesses described how terrorist Khalid Masood drove his car along a busy pedestrian sidewalk across the iconic Westminster Bridge - knocking down dozens in his way, forcing some to leap into the busy morning traffic and one woman to jump off the bridge itself into the River Thames over 50 feet below.

After pulling up Masood jumped out and stabbed Keith Palmer - an unarmed policeman guarding the British Parliament - after which he was shot dead by a bodyguard of Britain’s Defense Secretary Sir Michael Fallon.

One political blogger reported that Masood was only three unlocked doors away from Prime Minister Theresa May - who was in Parliament at the time for a vote.

The Palace of Westminster went into lockdown and the Prime Minister was bundled into a car to be driven away.  Parliament resumed as normal Thursday morning and May told legislators, “Yesterday an act of terrorism tried to silence our democracy, but today we meet as normal, as generations have done before us and as future generations will continue to do, to deliver a simple message: We are not afraid and our resolve will never waver in the face of terrorism."

Commons doorkeeper tells me he worked in John Lewis when bombed by IRA. Later that day it defiantly re-opened for 30 mins b4 closing time.

Ireland’s Minister for Social Protection Leo Varadkar told the Journal.ie that the Irish Embassy in London had been in contact with the Irish woman in question  “to offer our support and condolences and any consular support” and that he understood she is “recovering well from her injuries”.

President Higgins has expressed the sympathy of the Irish people with the victims of the attack in #London. https://t.co/cgjlVIMp1i

The other victims include 12 Britons, three French teenagers, two people Romanians, four from South Korea, one German, one Pole, one from China, one Italian, one American and two Greeks.

President Trump was quick to offer his condolences to the family of the American killed and the other victims caught up in the attack.

Spoke to U.K. Prime Minister Theresa May today to offer condolences on the terrorist attack in London. She is strong and doing very well.

A great American, Kurt Cochran, was killed in the London terror attack. My prayers and condolences are with his family and friends.