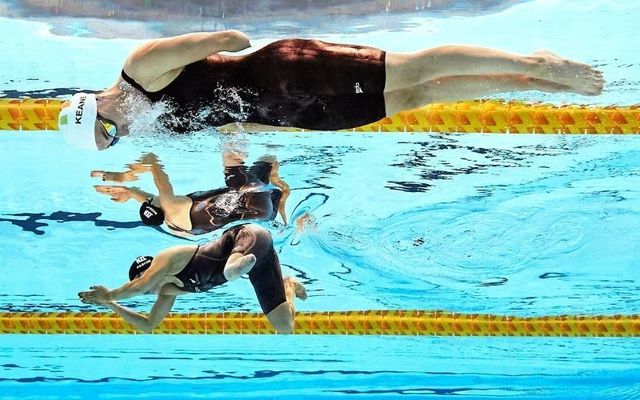 Keane in action during her SB8 100m breaststroke heat earlier this week. Getty

Swimmer Ellen Keane has won Ireland's first gold medal at the Paralympic Games in Tokyo after she recorded a personal best to win the SB8 100m breaststroke final.

Keane came into Thursday's final with high hopes after she won her heat with a personal best time of 1:21.71 but she exceeded all expectations by shaving a further two seconds off her personal best to take gold in 1:19.93.

I’m currently sitting in the food hall by myself having a little cry.

Some dreams do come true 🥇

Thank you for all the support x pic.twitter.com/ZvAu4QKC4S

The 26-year-old trailed New Zealand's Sophie Pascoe by half a length at the halfway stage but stormed back in the final length to overtake Pascoe with 25 meters remaining.

From there, she never looked back and touched home first ahead of Pascoe, who finished in a time of 1:20.32.

Russian athlete Adelina Razetdinova took bronze with a time of 1:24.77 while defending champion Katarina Roxon of Canada had to settle for fourth place.

Keane, who won a bronze medal in the same event in Rio de Janeiro five years ago, revealed that not everything went to plan in her spectacular gold-medal performance on Thursday.

She said that her goggles malfunctioned and started filling up with water as soon as she dove into the pool and said that she couldn't properly make out other swimmers.

"I don't think it's fully sunk in yet," she told RTÉ Sport after the thrilling final. "When I dove in my goggles filled up with water but I think that was maybe a good thing because I couldn't see where the girls were around me.

"Just on the turn I saw Sophie a little bit but I just had a game plan in mind and I stuck to that."

Incredibly grateful to my coach @davemalone77 & @hayleyburke89 for all the hours they’ve put into making this dream become a reality. Also to physiologist @ciara_soc & @pmcphysio

This gold is just as much theirs as it is mine 🥇 https://t.co/g30ADuvpxq