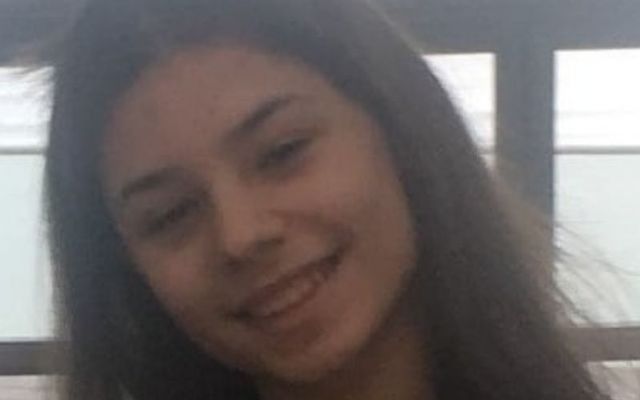 Svetlana Murphy is described as being 5 ft 1 with brown hair and brain eyes. Garda Info Twitter

Update 5:25 pm EST: An Garda Síochána confirmed in a statement that the Child Rescue Ireland Alert (CRI) for Svetlana Murphy, 14, has now been stood down.

"Svetlana Murphy has been located safe and well in the Belfast area. She is in the safe custody of the Police Service of Northern Ireland, and will be re-united with her family tonight.

"An 18-year-old male has been arrested by the Police Service of Northern Ireland and is currently in custody.

"We would like to thank the public, media and other agencies for assistance provided during this alert. No further media action is required at this time."

Update: As of 3:30 pm EST on April 22, the Child Rescue Ireland Alert (CRI) remains active for Svetlana Murphy, 14, who is believed to be in the company of Nojus Maculevicius, 18.

A CRI alert remains in place.

An Garda Síochána are continuing to appeal to the public for assistance in tracing the whereabouts Svetlana Murphy.

Svetlana Murphy was last seen leaving her home on Coast Road in Blackrock, County Louth, at 4 p.m. on Monday and gardaí said in a statement that they are concerned about her welfare.

She was last seen with 18-year-old Nojus Maculevicius in a silver Hyundai Veloster and was reported missing by her father.

The 14-year-old has brown hair and brown eyes and is described as being 5 ft 1 and having a slim build. She was last seen wearing navy tracksuit bottoms with a red and white stripe on the side, a black zipped top, and black runners.

Nojus Maculevicius, meanwhile, is described as being 6ft in height and of a slim build. Gardaí said that he is clean-shaven and has dark brown hair. He was last seen wearing dark grey Snickers work trousers, a black Snickers top, a khaki hoodie, and black boots or Adidas running shoes.

The pair were reported seen in Newry, County Down, at 7 p.m. on Monday and in the Greater Belfast area at 5:35 p.m. yesterday.

Gardaí said that they have serious concerns about the health and welfare of Svetlana Murphy and said that they are not currently aware of her whereabouts.

However, Superintendent Liam Geraghty said that he is confident that the pair have not left the island of Ireland and said that gardaí are currently working closely with the Police Service of Northern Ireland.

Geraghty urged the pair to make contact with the authorities and appealed to anyone with information to ring 112 or 999. Members of the public are not advised to approach the pair and are instead advised to contact the emergency services immediately.