Margaret Keane's family has been denied permission to include a well-known Irish saying on their mother's grave. 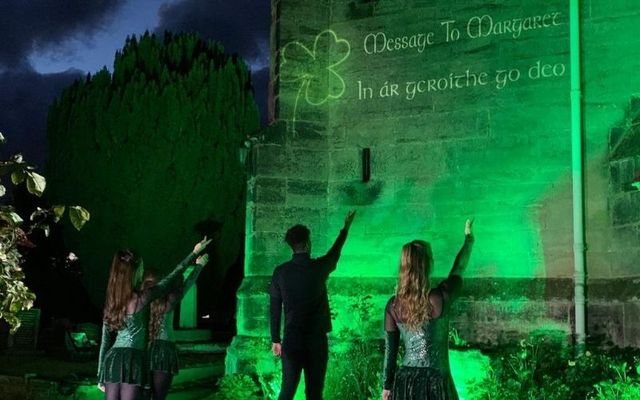 St. Giles Church in Coventry was lit up with a well-known Irish phrase on Wednesday night. A Message to Margaret Facebook

An Irish family fighting to include a well-known Irish phrase on their mother's grave in England has projected the phrase onto a local church in Coventry.

Margaret Keane died on July 29, 2018, and her family marked her two-year anniversary by projecting several messages onto a wall of St. Giles Church Exhall in Ash Green, where Keane is buried.

Keane died unexpectedly at the age of 73 two years ago and her family sought to include the phrase "In ár gcroíthe go deo" (In our hearts forever) on her tombstone.

However, the Church of England rejected the headstone, arguing that the Irish phrase could be misinterpreted as a political slogan, and Keane's family has since launched a  campaign to appeal the decision.

Her family gathered outside St. Giles Church on Wednesday evening as messages of solidarity were projected onto the church's walls.

One message, for instance, said: "To a dear friend that I miss so much, you will always be in my thoughts and my prayers. Rest in peace.

Another message, meanwhile, said: "To live in hearts we leave behind is not to die."

It’s just a stone, on a grave, in a leafy spot They’re just words to remind and assure Words for a mother, in her mother...

Posted by Message To Margaret on Wednesday, July 29, 2020

St. Giles Church has supported the campaign and Wednesday night's event was a clear act of solidarity with the deceased Irish woman.

Read more: How much Irish is actually spoken in Ireland today?

Born in Ireland, Keane relocated to England and became a stalwart of the Coventry community, where she was known for her work in the Gaelic Athletic Association (GAA).

The Irish community in Coventry has rallied around the campaign and strongly supported "A Message to Margaret", an online fundraiser in July which aimed to raise awareness and funds for the campaign.

The Church of England's decision has been hotly contested by members of the Irish community in England.

Caroline Newey, one of Keane's six children, filed an application for the headstone with the St. Giles Parochial Council, who voted in favor of the application by six votes to five.

The application, which asked permission to include a Celtic cross and a GAA emblem in addition to the Irish phrase, was rejected by the Diocesan Advisory Committee and later by the Church of England's Consistory Court, which ruled that the headstone must include an English translation.

Stephen Eyre QC, a judge for the court, ruled on May 6 that the phrase would be misinterpreted as a political slogan.

"It is clearly right that the memorial to Mrs. Keane should record and celebrate her Irish heritage and her dedicated community service through the GAA," Eyre said, indicating that Keane's family could include the phrase as long as they included an English translation.

Newey, however, argued that the inclusion of the English translation would make the headstone too cluttered and that the Irish phrase carried symbolic meaning.

"Our Irish is not political," Newey told IrishCentral in June. "It is much more sentimental than that. We did not feel we were making any statement, other than love for our mother.