Colin and Eithne Bell started up the Kevin Bell Repatriation Trust in 2013 following the death of their 26-year-old son Kevin in a New York hit-and-run. 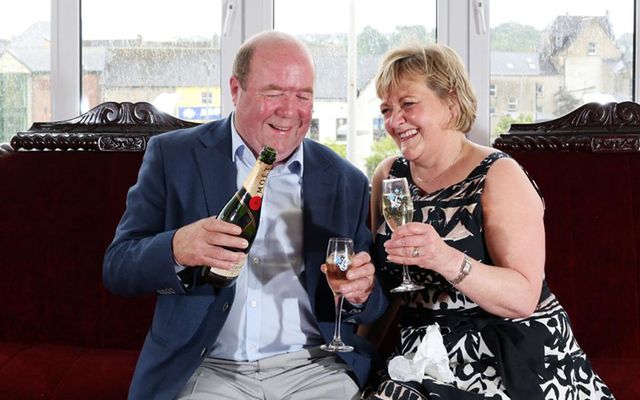 An Irish couple who started a charity to repatriate the bodies of Irish people who died suddenly or tragically while overseas have become the lucky lottery winners of over $1 million.

Colin and Eithne Bell, from Newry in Co. Down, started the Kevin Bell Repatriation Trust in 2013 following the death of their 26-year-old son Kevin in a hit-and-run in New York. The Bell family began fundraising to make up the enormous expense of bringing Kevin home to be buried and continued their fundraising since to alleviate the financial burden on other grieving families who are forced to go through the same process.

While the Aisling Irish Center in New York helped to bring Kevin home to be buried, other families were previously left to spend thousands on repatriation with little or no help. The Bell Family Trust has since helped over 300 Irish families to cover the cost when their loved one dies overseas in sudden or tragic circumstances. The families they have helped include those of the victims of the Berkeley balcony collapse tragedy in 2015 and the family of Danielle McLaughlin, the Donegal woman who was murdered in India earlier this year.

Former school teacher Colin, 64, and retired nursery school worker Eithne, 61, have now been rewarded for their good deed in a massive windfall from the EuroMillions UK Millionaire Maker, winning $1.3 million (£1 million) on June 20.

"I told Eithne I thought we had just won £1m and she laughed, thinking that I was joking. But when I repeated it and she saw the look on my face, she soon realized that I was being serious," Colin said, explaining how he’d just settled down for a quiet evening when they discovered the news.

The couple, who have six other children, have thanked their son Kevin, who they say has been watching over them to give them this spot of good luck.

"Knowing Kevin he's probably up there saying 'I knew I could do something for you'. Kevin's still looking after us and looking after the rest of the family, in a different sort of way," said Eithne.

As for how they’ll spend the money, Colin and Eithne say that most if it will be spent on the rest of the family, although Colin fancies getting himself a premium level seat in Croke Park while Eithne would like a new sunroom.

Having organized a trivia and auction night to raise money after the death of Kevin Bell on June 16, 2013, $72,000 was initially raised and transformed the once-off fundraiser into an incredible charitable project which saw the trivia night becoming an annual tradition.

So lovely, best of luck to them both, they've helped so many families in their time of need https://t.co/iNdcDTICOG

“It is great that Kevin’s name and spirit is living on through the trust,” Kevin’s sister Ciara told Her.ie in 2014.

“We have been overwhelmed with the support we have received.

“If they had not have held the initial fundraisers to get Kevin home we would not have been able to set up the trust.

“It will never bring him back or ease the pain of losing him, but it keeps us busy and it does help us knowing we are helping others.”