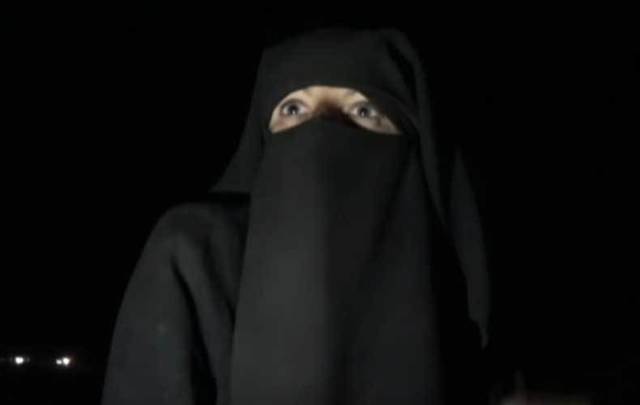 Lisa Smith, 38, from Dundalk, Co Louth, was a flight attendant in the Air Corps before converting to Islam.

She can be seen in a photo as part of a crew that flew Taoiseach Ahern to the US in April 2008.

It is believed Smith left Ireland for Syria in 2015 to join the ISIS caliphate. She married a British-born jihadi and gave birth to a child in Syria. Her husband was killed four months ago.

She recently appeared on ITV in a video posted online.

She told ITV: “You come, you see the propaganda, you want Islam, you want to come and live in a Muslim country and environment.

“No music, no smoking, no fighting, no drinking, no prostitution … you want a clean life like this, this is what you want, but sometimes it is not like this.”

A source told The Irish Mirror: “When I knew her she was based in Gormanston camp around 2005.

“She also worked on the government jet for a while.

“She was in the Defence Forces for at least ten years.

“She left when she was Corporal, she would have been an asset to ISIS.”

Smith joined the Defence Forces at 19. It is believed she served with the 27 Battalion in Dundalk for five years before joining the Air Corps.

Reports suggest that she was recently detained in a northern region of Syria.

A statement released by The Department of Foreign Affairs said: “It is our policy in providing consular assistance and of matters of security that commentary is not given on individual cases and the people or families involved or their background.

"The Government is aware of media speculation and reports of an Irish citizen being held in Syria."