Pat Quinlan led 155 Defence Force members back to Ireland after the Siege of Jadotville in 1961. 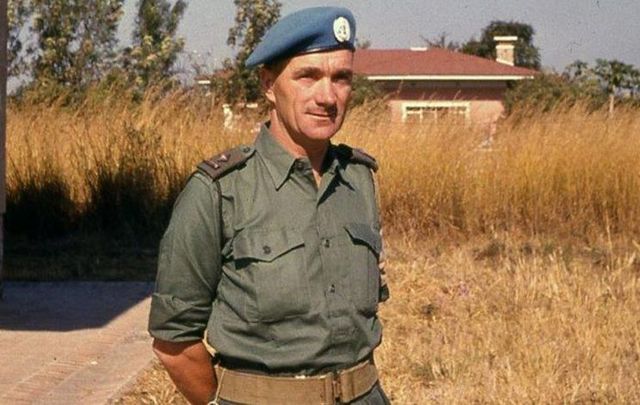 A brave army commander whose lightly armed force held out for six days in the siege at Jadotville, made famous on film, has finally been honored with a memorial in his home county, Kerry, 56 years after the battle.

The late Commandant Pat Quinlan from Caherdaniel led 155 Defence Force members back to Ireland after the Siege of Jadotville in 1961.

Former Taoiseach Enda Kenny, officiating at the memorial, said Quinlan was an extraordinary leader and a true hero to his men following a furious battle with Katangese forces in the Congo in September of 1961.

He said Ireland should be proud of its Defence Forces and their peace keeping work with the United Nations from their first mission in the Congo to the present day.

A crowd of 300, including Quinlan’s adult children and some Jadotville siege survivors attended the unveiling of the memorial statue of the hero leader in his UN uniform.

One of the survivors, Noel Carey from Blarney, said, “Pat Quinlan’s courage and concern for his men and his leadership emerged above everything. His presence and influence could be felt across the entire position, encouraging, motivating and re-assuring every man. We literally would all have died in Jadotville but for him.”

Quinlan led his contingent of 155 men into Jadotville in 1961 as part of a UN mission only to be attacked by secessionist Katangese forces and foreign mercenaries.

After six days of fighting in which the Irish inflicted over 200 casualties on the Katangese without a single Irish fatality, Quinlan was forced to surrender with food and ammunition running low. A month later he and his men were released as prisoners of war with all eventually returning safely to Ireland.

Brigadier General Patrick Flynn paid tribute to Quinlan, saying his decision to dig in at Jadotville had become part of the army’s training on tactics, techniques and procedures while it was also taught in military courses in Britain, Germany and Australia.

The memorial has been placed in the heart of where Quinlan grew up at Coomakista, near Caherdaniel.

Also present at the unveiling was author Declan Power whose book, The Siege of Jadotville, provided the basis for the film of the same name which starred Jamie Dornan as Quinlan.