As war movies go it has everything that makes such movies enjoyable...I can't recommend it enough. 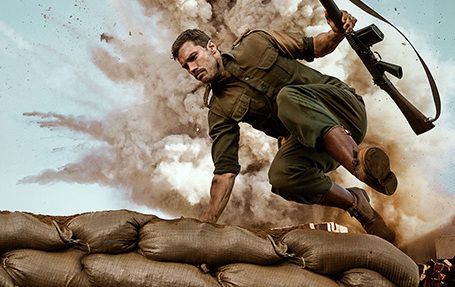 Jamie Dornan in the Netflix original "The Siege of Jadoville." Netflix

Wow! I had tempered my expectations too much. As war movies go “The Siege of Jadotville” (available on Netflix) has everything that makes such movies enjoyable: good guys against bad guys, heroic soldiering in the face of impossible odds and poor political decision-making and great action scenes. I can't recommend it enough.

The movie is based around the Irish Army's role in the United Nations' bid to roll back the attempt by the Congo's Katanga province to secede from the newly independent African nation in the early 1960s. The secessionists were backed by French Foreign Legion soldiers acting as mercenaries hired by French and Belgian mining companies who didn't care for the new government's desire to nationalize the mines.

Is the film historically accurate? I have no idea because the whole incident was and is a complete mystery to me. Whether it is true or not, I believed what I was seeing and that's all you need to enjoy the movie.

The plot centers around a company of 150 Irish men under the leadership of Commandant Pat Quinlan, played by Jamie Dornan. I had never seen Dornan in anything before this so I didn't know what to expect, but he was very good.

Jamie Dornan (right) stars in "The Seige of Jadoville."

If you're hoping for complex character development with a load of a load of background on the personal struggles each man has had to deal with up to this moment in each man's life, forget it. There's none of that. We hear a little about a couple of mothers and we see a couple of brief scenes with Quinlan and his wife, but it's pretty straight-forward.

This is a movie about a group of Irish guys dumped at a crossroads on the African plains and all that matters is fighting, killing or being killed.

A force of 3000 men, who we really don't get to know too well, is arrayed against them, which gives the movie a similar feel to “The Alamo” or “Zulu.” The bad guys are the mercenaries and those local fighters loyal to the secessionist province, the mine owners and those above Quinlan, both of whom are Irish. One of those is Quinlan's commanding officer, General McEntee, a fictional character, and the other is the United Nations Special Representative to the Katanga region, Irishman Conor Cruise O'Brien, who was very much not a fictional character.

O'Brien comes across as completely out of his depth and way too devoted to the cause of the UN to the extent that he was willing to let his fellow Irishmen die if that's what it takes to protect the United Nations' image. Again, I have no idea if O'Brien is accurately portrayed or not, but this kind of movie needs one of either a slimy, self-obsessed politician indifferent to anyone but himself or the type played by O'Brien here, the slightly less-than-human ideologue.

But even the political machinations don't take up much time. This is an action movie and the action is well done. The bad guys come in waves of ever increasing strength and the Irish have to adapt and defend, which they do gallantly, holding out for reinforcements. And whiskey.

“The Siege of Jadotville” may or may not be good history, but it's whetted my appetite to learn more. I can't wait to read Declan Power's “Siege at Jadotville,” on which the movie is based.

If the real story doesn't interest you, don't worry about it. The story as presented in the movie is, minus a few quibbles, more than believable. The pacing is excellent and the acting more than sufficient. “The Siege of Jadotville” is the best Irish action movie I've ever seen.