Irish woman Clodagh O'Sullivan and her American beau Brady Elliott made a "lucky" connection on Tinder back in July 2019 when Elliott was visiting Ireland. 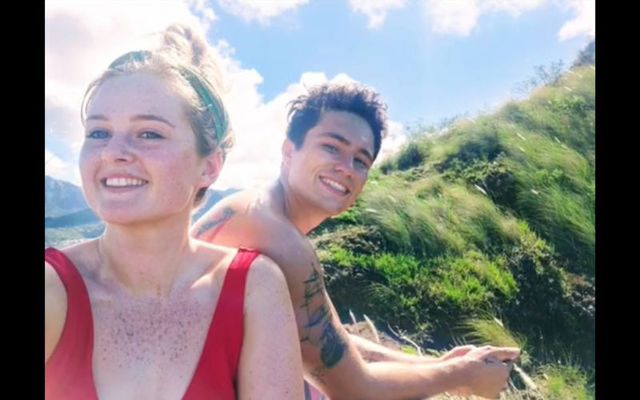 Clodagh O'Sullivan and Brady Elliott are now happily in love after a chance Tinder match in Ireland. clodaghosullivan, TikTok

This Irish American love story might make you give Tinder another chance.

Clodagh O’Sullivan, from Co Kerry, and Brady Elliott, from Florida, are now living in Ireland with their baby Jamie after making a lucky connection on Tinder back in July 2019.

At the time, Elliott, a US Navy medic who was based in Hawaii, was on a day trip in Dingle during his vacation in Ireland. Later, when awaiting his flight home, Elliott was perusing Tinder when he matched with O'Sullivan.

"Our apps must have been in proximity for about an hour when we matched," O'Sullivan told the Irish Mirror. "It’s really lucky we crossed paths."

The two weren't able to meet in person after they started chatting on Tinder as Elliott was about to fly, but they added each other on Instagram and started sending messages and speaking.

O'Sullivan admits: "Never in a million years did I think I would fall in love and start a family after accepting that Tinder message."

Elliott, however, knew from the start that this wasn't any ordinary Tinder connection: “We matched on the last day of my vacation, and I thought she was gorgeous.

“I was pretty obsessed with her from the get-go. Even though it seemed a bit silly to keep texting someone two oceans away."

As the two continued talking, Elliot said he asked the universe for a sign. "Then ‘Nancy Mulligan’ came on by Ed Sheeran and I knew for sure it was meant to be," he said.

“I kept asking her to visit me in Hawaii because I knew she was something insanely special."

Eventually, Elliott won O'Sullivan over and they booked a ticket for her to go to Hawaii. She says now that she almost talked herself out of it, but is so happy she didn't.

Elliott describes meeting O'Sullivan at the airport in November 2019 as the "most nerve-racking day of my life," but he knew Clodagh was the one right there in the airport.

"Our first few weeks together felt like we had known each other through a thousand lifetimes," he said.

Just a few weeks after O'Sullivan's visit to Hawaii, Elliott booked a ticket back to Ireland where O'Sullivan showed him around Dublin and Kerry.

The two had a "very sad goodbye" at the end of Elliott's time in Ireland as they thought it would be months before they could see each other again. However, a few days later, Elliott surprised O'Sullivan with a plane ticket to Florida where she met his family.

In January 2020, Elliott was deployed so the two really thought it was going to be months before they'd see each other again. The pandemic, sadly, made that wait even longer.

In October 2020, they were finally able to reunite and made things official during a trip to Jamaica and the US in October 2020. During that visit, O'Sullivan got pregnant. That December, Elliott packed his bags and moved to Co Kerry, and the lovebirds welcomed their son Jamie in July 2021.

Elliott now says: “Living in Ireland is amazing – I never would have imagined living in a different country. But living here with her and our little baby boy is the most surreal thing I will ever experience, and I love every second of it.”