Irish feminists have accused them of acting like British imperialists and warned them, “We have had enough of colonialism in Ireland without needing more of it from you.” 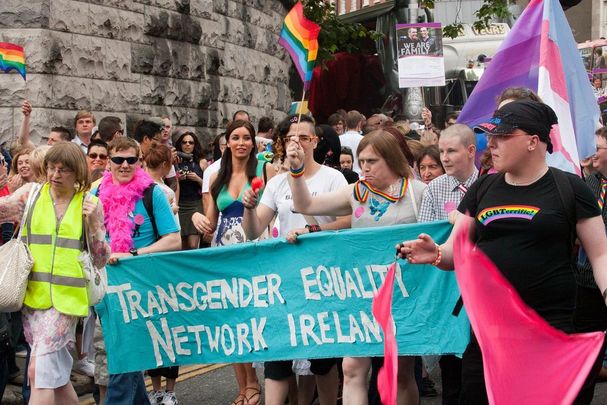 Irish feminists have hit out at a group of British trans-exclusionary radical feminists (TERFs) who have organized a meeting in Ireland as part of their campaign to oppose Britain’s proposed Gender Recognition Act (GRA).

The proposed GRA would end the requirement that trans people obtain a doctor's diagnosis before they can officially change their gender. In 2015, Ireland passed a similar act that allows self-identification - namely gives an individual the right to change their gender and apply for a new birth certificate without medical treatment.

At the time Ireland was hailed by Human Rights Watch as a “global transgender leader” but as the British Government considers whether to pass similar legislation, TERFs have decried what they view as the abolition of gender.

The We Need To Talk tour has organized meetings opposing the GRA in four British cities and a further event next month in Dublin is being publicized where “guest speakers will discuss abortion, gender and other feminist issues.”

A number of Irish feminists have penned an open letter to the group which touches on trans rights and Ireland's experience of colonialism.

“Trans people and particularly trans women,” they write, “are an inextricable part of our feminist community. The needs of trans people are part of our campaigns. There is no difference between ‘feminists’ spreading transphobic and transmisogynist ideas or spreading racism or homophobia. We want no part of it, and we don’t want it here.”

They also hit out at what they labelled the indifference of the British feminist movement to Irish feminists campaigns: “Do you know, for example, that in the north of Ireland, legally part of the UK, women still cannot access safe and legal abortion? Have you campaigned on this in any way? If you have, why don’t we know about it?

“Do you have any kind of concept of what a feminism in a country shaped by struggle against Empire looks like?... We have had enough of colonialism in Ireland without needing more of it from you.

“We neither want nor need your lecture tour. You’re not welcome here,” they conclude.

Proud to be one of the feminists to sign this ✌️

UK TERFs are planning to hold a tour in Ireland spreading their nasty exclusionary lies. Irish feminists think this is ? and are having none of it. There's no place for transphobia in feminism. TERF hate is not welcome here ? https://t.co/6np00bBGFt

Initially the letter was signed by 36 women but dozens more have since added their names via the Feminist Ire blog.

The organizers of We Need To Talk have been contacted for comment.

What are your opinions on the Gender Recognition Act? Leave us your thoughts in the comments section, below.