The Clarke family from Co Galway nabbed the Guinness World Record for the largest number of siblings to live to 100. 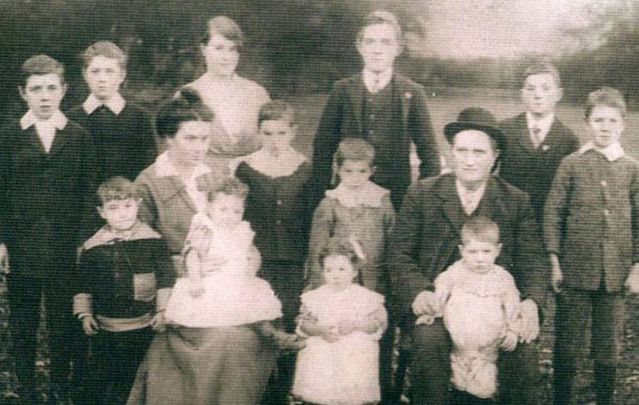 The Clarke family of Loughrae, Co. Galway nabbed the Guinness World Record for the largest number of siblings to live to 100, with five of the siblings celebrating their 100th birthdays. Above: The Clarke family in 1916. Handout

In March, 2015, the Clarke family from Co. Galway officially became the longest living group of siblings, with five of the 13 brothers and sisters all living to celebrate their 100th birthdays.

After months of campaigning by their relatives, the siblings’ achievement was finally recognized by the Guinness Book of World Records.

The Clarke siblings were born and raised on a cattle farm in Loughrea, Co. Galway. There was an early precedent for their astounding longevity – their mother, Margaret, also lived to be 100.

Joe, Charles, Pat, James and Madge, the only girl, have 504 years of life between them, the Irish Times reported last weekend. That’s over half a millennium.

James, who emigrated to the US and lived in The Bronx, celebrated his 100th birthday there in 2006. At the time, the Clarke family thought they had secured the record because of their mother’s wonderfully long life, only to learn that it strictly applied to siblings.

Madge caught up with her brothers last year, when she celebrated her 100th birthday. Shortly after, her son Joe Fanning went about collecting all the information necessary to prove their claim.

“Anything at all that would prove that these people had reached 100. It was just the birth certificates and the death certificates; I had to get it all out. I gave them as much as I could,” he told the Irish Times.

“I was extremely happy and proud for them because it was something that we were looking at for a number of years. They were just a phenomenal family and now it’s a reward for them that they have this record.”

He said that each of the siblings possessed incredible faith. “They had this great patience and an ability to communicate with you. They would always make you feel at home; their door was always open and there was tea in the pot on the table,” he added.