The sinking of the USS Indianapolis resulted in one of the greatest losses of life in the history of the US Navy and an unprecedented court martial that marked the battleship’s captain, Charles Butler McVay III. 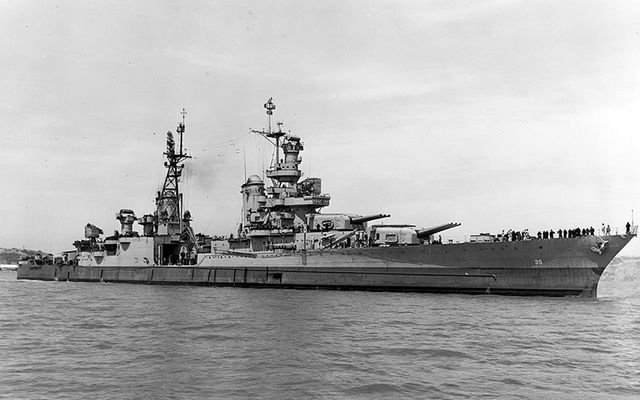 USS Indianapolis about 3 weeks before its sinking Public Domain

The discovery of the USS Indianapolis at the bottom of the Philippine Sea has raised again the memory of a tragic loss of life that might have been avoidable, and also what many feel was grave injustice done to the Irish American captain of the ship that delivered the first atomic bomb.

The sinking of the cruiser on July 30th 1945 resulted in one of the greatest losses of life in the history of the United States Navy.

It also resulted in an unprecedented court martial that for the rest of his days marked the battleship’s captain, Charles Butler McVay III.

The Indianapolis had rested undisturbed at a depth of 18,000 feet, or roughly 3.5 miles, but was found last week by a research vessel owned by Microsoft co-founder Paul Allen.

The great ship had waited 72 years to be found.

On a warm tropical night in the waning days of World War II what had been a steel-encased home for over 1,200 sailors vanished into the depths of the Pacific a mere 12 minutes after two torpedoes fired by a Japanese submarine struck its starboard side.

The submarine attack led to one of the most frightening and riveting dramas in the history of the United States Navy, one that was played out on a speck of ocean that was, supposedly, hundreds of miles removed from the final days of fighting that had raged across the Pacific since the attack on Pearl Harbor more than four years earlier.

The list of Indianapolis crew members who became ensnared in that drama reflected the diversity of America.

Not surprisingly, it was dotted with Irish names, all the way from the engine room of the doomed ship to its bridge, where ultimate command rested in the hands of Captain McVay.

To many people, the name of the USS Indianapolis has long had a familiar ring.

And if they think about it for a few moments it all comes back, or at least parts of it.

Yes, it’s the ship in the story as told by Captain Quint in the movie “Jaws.”

Quint, the crabby fishing boat captain played by the late Robert Shaw, delivers a first-hand account of the Indianapolis sinking and its horrific aftermath to his shark-hunting companions, Hooper (Richard Dreyfuss) and Brody (Roy Scheider).

There was no Quint on the real Indianapolis, but there was a crewman named Shaw. He didn’t survive.

There were also crewmen named Conway, Flynn, Hurley, Murphy and many more with names rooted in an island a world away from the Philippine Sea.

And there was Captain McVay, a man who, according to Richard Newcomb in his classic book “Abandon Ship,” possessed “a good Irish wit.”

But sadly, on a fateful July night, no Irish luck.

The Indianapolis had performed its primary mission when it ran headlong into the war again.

After leaving San Francisco, the cruiser delivered the parts of what would be the Hiroshima atomic bomb to the island of Tinian on July 26. Not even McVay knew the exact nature of his ship’s cargo.

After a stopover in Guam, the Indianapolis had set sail for Leyte Gulf to rendezvous for training maneuvers with the USS Idaho.

Both ships were to play a role in the expected invasion of Japan.

McVay requested a destroyer escort for the Leyte run. This was standard practice, but he didn’t get one.

Crucially, the Indianapolis also lacked submarine detecting sonar, a shortfall that would make an escort seem even more necessary.

Still, the voyage to Leyte promised to be as routine as you could expect in wartime.

Captain McVay had an option. He could zigzag along his course but was not required to do so. He did for a time, but before turning in he gave orders to cease zigzagging.

According to the subsequent testimony of many survivors, visibility was poor, the chance of an attack thus considered remote.

Besides, zigzagging was no sure and certain proof against being hit by a torpedo anyway.

The peace of a Pacific night was shattered 14 minutes into the new day on July 30, a date which, by a cruel twist of irony, was Captain McVay’s birthday.

The Japanese submarine, the I-58, fired six torpedoes at the silhouette of a large battleship. Two of them hit home, one in the bow and the other, most critically, in a mid-ships section beside the magazine and a fuel tank.

The Indianapolis, with 1196 officers and crew on board, was blown in two. The ship’s electrics were snuffed out and the end was only minutes away.

About 900 men made it off the sinking ship.

Some of them scrambled aboard life rafts, but most found themselves in the water and dependent on standard issue life jackets that were to prove less than a match for days of immersion.

The tale, as recounted by the Quint character in “Jaws,” pretty well sums up what hundreds of men now faced.

Sharks came cruising before the shattered Indianapolis had even settled on the ocean floor.

The moment when a sailor realized that he had survived the torpedo attack was just the starting point for a harrowing five-day ordeal, one that would only end by a stroke of returned luck, maybe Irish, maybe not.

Again, a critical factor that would play hard on the survivors as they treaded water, or huddled on a raft was the fact that navy regulations did not require a search — even if a ship was days overdue in port.

So when the survivors were discovered, it was not as a result of an organized search and rescue mission.

On the fourth day, a Ventura bomber on antisubmarine patrol had a problem with a newfangled radar antenna dangling out of the rear of its fuselage.

The pilot went aft in an effort to sort out the problem. Looking through a window in the bomber’s floor, the pilot, Wilbur Gwinn, spotted an oil slick.

His first thought was a Japanese sub, and he alerted his crew for a bombing run.

Instead of an enemy vessel, however, what the Ventura crew then noticed in the water were men splashing and waving.

It was the start of a massive rescue operation, but not the end of the ordeal for the survivors of the Indianapolis.

Lost WW2 warship, USS Indianapolis, found in the Pacific Ocean, 72 years after it was sunk by a Japanese submarine https://t.co/yuegfmRX6r pic.twitter.com/3emC4tm4Es

By the end of the fifth day, 317 men had been pulled alive from the water. The rest of the initial survivors had died of wounds sustained in the attack, thirst, drowning, the effects of fuel inhalation, or by shark attack.

The loss of the Indianapolis had been a catastrophe, though one immediately overshadowed by far bigger headlines - the dropping of the atomic bombs and the end of the war.

The Indianapolis story, however, was far from over.

A court of inquiry was convened in Guam and it decided to court-martial McVay, a decision that caused uproar and led to allegations that McVay was being served up as a scapegoat to cover the navy’s overall culpability.

McVay was charged with “culpable inefficiency in the performance of his duties” and “negligently endangering the lives of others,” a reference to the fact that the Indianapolis was not zigzagging when struck by the torpedoes.

McVay was found guilty on that second charge. His career was in ruins and though the Navy Department had a change of heart and restored him to duty with the rank of rear admiral in 1946, the stain of the court martial would never be fully erased.

On a December day in 1968, his Irish wit run out, Charles Butler McVay took his own life in the garden of his home in Litchfield, Connecticut.

The day before, McVay had received a hate letter from a relative of a crew member lost in the sinking of the Indianapolis.

In October, 2000, a campaign by Indianapolis survivors bore belated fruit when a congressional resolution was signed by President Clinton.

It stated that McVay’s record should reflect that he had been exonerated for the loss of the Indianapolis, and those crew members who had perished.

In July, 2001 the Navy Department formally exonerated McVay just before the publication of another book about the Indianapolis, “In Harm’s Way,” by Doug Stanton.

Despite the exoneration, however, the court-martial conviction yet stands and the conviction of hazarding his ship by failing to zigzag remains on Captain McVay’s record.

Never in the history of the U.S. military has the verdict of a court-martial been overturned; indeed, there is no known process for doing so.

Still, what has been achieved has brought some peace to Indianapolis survivors who campaigned for decades to clear their captain’s name.

“His exoneration is tantamount to an admission that he should never have been court-martialed in the first place,” said a statement published some years ago on the website (www.ussindianapolis.org) of the survivor’s group chaired by Paul J. Murphy, who served as a fireman on the Indianapolis.

Of the crew of 1,196 men on board 879 men died, either immediately after the attack, or in the days before recue.

The exact location of the ship remains classified because it is an official war grave at sea and is the property of the U.S. government.

Of those who survived the sinking, just 19 are still alive today.

The fact that the ship has been found while any crew members are still living at all is due in large part to new technology, and also the enduring human desire to find what has been lost.

The USS Indianapolis is a tiny presence on a vast ocean floor, but one that has, for over seventy years, reached upwards and outwards to lay claim to the memories of those who survived, and those who care to take custody of their memories on behalf of generations yet to be.

This story first appeared in the Irish Echo. For more, visit their website.