Irish hurling in jeopardy as ash tree at risk of endangerment 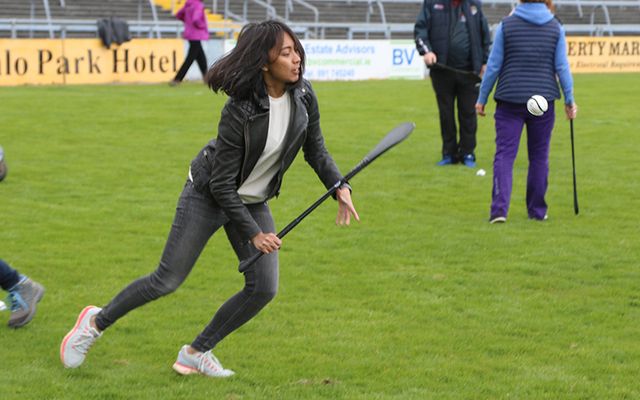 An international delegate learns some hurling skills at Pearse Stadium as part of the 2017 Climate Change, Agriculture and Food Security Conference in Galway. NUI Galway

The clash of the ash is a time honored image in Irish sport.

But this description of hurling is now under threat as a result of climate change, a recent conference at the National University of Ireland Galway was told.

The conference delegates, according to a release, identified portfolios of “Climate Smart Agriculture practices and innovations for decarbonizing agricultural systems to provide food and bioresources for an expanding global population.”

And with support from the Gaelic Athletic Association, the delegates also learned about the Ash tree and its central, almost spiritual, role in one of Ireland’s sporting gifts to the world: hurling.

And what the delegates heard was not the best of news.

Delegates were given an all-round briefing on Gaelic games in general, and a very particular one by NUI Galway agricultural economist, Kevin Kilcline, on the threat to traditional hurling.

Kilkline, said the release, explained how almost half a million hurleys are produced in Ireland each year.

He told the delegates how hurley sticks have been made from ash trees by craftsmen going back into the mists of time.

But due to the present day problems with sourcing healthy ash trees for hurleys, the GAA has now approved a wood-free, synthetic carbon-fiber hurley, which the delegates compared on the pitch to the wooden versions made from ash.

GAA stars and NUI Galway scientists explained to delegates how the best hurleys can only be made from the ash tree, which is now threatened by the ash dieback fungal disease.

As ash dieback is affected by temperature changes, the situation provided a good example of how Ireland’s national sport could potentially be impacted, and adversely so, by climate change.

And for this disturbing news on Ash trees the conference reached across two oceans to the land of the Coa tree.

The last time Earth had such levels of atmospheric carbon dioxide was about three million years ago.

Back then, global average temperatures over long periods of time were estimated to be about 3.6 to 5.2 degrees warmer than it is today, and the planet may now be headed in that direction.

While the conference was focused on the impact of climate change on agriculture and food security, it also highlighted global warming and extreme weather effects due to climate change will impact on all sectors of society in the years ahead.

For instance, climate change will affect the geographic distribution of pests and diseases (of humans, animals and plants), with some diseases becoming more widespread, while others may become less prevalent.

Global temperature increases have also affected the spread of ash dieback disease and emerald ash borer beetles, both of which represent significant threats to the security of European - and Irish - ash woodlands and forestry.

Professor Charles Spillane, Head of the Plant and AgriBiosciences Research Centre at NUI Galway, said: “The impacts of climate change on the predicted spread and distribution of ash dieback disease across Europe are being analyzed, in conjunction with plant breeding efforts to identify naturally occurring genes that can be hybridized to make ash trees that are resistant to ash dieback.”

Somehow, the sound of the latter doesn’t inspire the imagination to the extent of the former.