Young Irish-Americans can spend summer days connecting with their Irishness at the CIAA which offers immersion with an Irish family in Co. Galway. 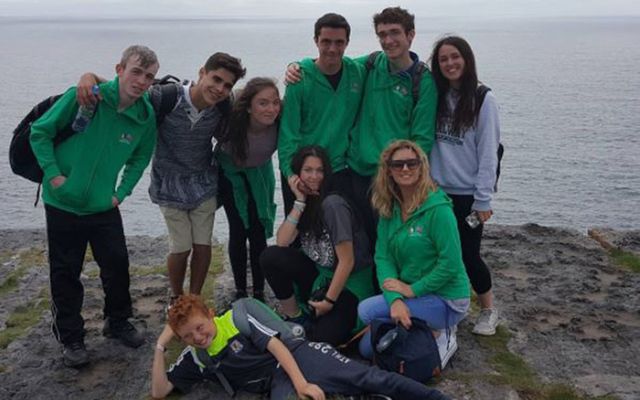 For generations of Irish school kids, it was a rite of passage into a deeper appreciation of their Irishness.

The summer holidays would arrive, the bag would be packed, and it was off to an Irish-language summer school in the Gaeltacht.

The idea was that by living with a family that spoke Irish morning, noon, and night the student - who studied Irish in school but typically had little involvement with the language beyond it - would crack the linguistic code and arrive back home spouting a lot more than the cúpla focal.

In some cases it worked, in some, it did not.

But it’s rare indeed to find someone who attended Irish school who failed to come away from the experience with an enhanced sense, to some degree, of being, well, Irish.

The Bean an Tí (woman of the house), whoever she was, invariably had an effect.

The Irish government recently strove to have an effect on young minds when it introduced what it called a summer camp program aimed at young Irish Americans 15 to 17 years old.

In November 2015, then Minister for the Diaspora, Jimmy Deenihan, announced that the program would be primarily educational in nature and designed to encourage students “to develop a deeper connection with Ireland.”

A post shared by Celtic Irish American Academy (@celticirishamericanacademy) on Jul 18, 2016 at 9:37am PDT

Summer camp program participants, said Deenihan, would have the opportunity to travel to visit rural and urban areas, to learn about the country’s history, and to experience the modern face of Ireland.

The program, said Deenihan, would be initially run as a pilot phase.

He compared it to the “Birthright” program that has seen hundreds of thousands of young Jewish Americans visit Israel.

Pilot or not, the Irish version didn’t get far off the ground and, after twenty American students took part in July 2016, the program was canceled for this summer of 2017.

It was, said a government statement, “under review.”

All is not lost, however.

There are still ways that young Irish Americans can spend summer days connecting with their Irishness, inner or otherwise.

And one of those ways is signing on to the program offered by the Galway-based Celtic Irish American Academy.

Brian Fahy and Dr. Johanna Clancy, directors of the Celtic Irish American Academy with Minister for the Diaspora, Joe McHugh, at the recent Global Irish Civic Forum in Dublin.

The CIAA is the brainchild of Brian Fahy, a secondary teacher based in Salthill, just outside Galway City, and his daughter, Dr. Johanna Clancy, a lecturer at NUI Galway.

As the first and, thus far, the only group of Irish-American students was immersing itself in Ireland last summer in the government-run program, another group was doing much the same thing in the CIAA’s inaugural summer camp.

Brian Fahy, on a recent visit to New York, explained that he has many relatives in the U.S. and has spent a good deal of time in the United States over the last thirty years.

“I could sense that there was an ever increasing need to revitalize and reinvigorate the bonds between the U.S. and Ireland,” Fahy told the Echo.

A certain distance, or chasm, was developing, he said, this probably due to the tailing off of immigration from Ireland.

The best way to stop this from happening, he believes, is through working with young people and helping them engage with their ancestral homeland by way of actually visiting in it.

“Our aim is to engage high school students in an intellectually stimulating and deeply enriching exploration of their Irish Heritage,” said Fahy.

And he continued: “I really believe that to fully appreciate your Irish heritage, you must come and explore it at a young age. Hence, we provide a totally immersive program.

“To date, it has been left to the older generation to pass on the virtues of what it is to be of Irish descent. To embrace our history we must look to the future.

“The old Irish saying of ‘mol an óige agus tiocfaidh siad’ holds true here, that being praise and nurture the youth and they will come good.

“We are now providing a great opportunity for the young to live and learn in a secure environment while residing with a traditional Irish family.

“It is a great chance for high school students to develop as global citizens, and of course to enhance their resume through the volunteering, leadership and business elements of our program as well as gaining a deep appreciation of their culture and heritage.”

The immersion not only involves living with a host family but also attending classes in a range of subjects at St. Enda’s College in Salthill – where Brian Fahy is an assistant principal - going on guided tours and walks, learning about Gaelic games, Irish dance, and music.

Tours include an exploration of Connemara and parts of the Wild Atlantic Way, opportunities to horse ride and windsurf, visits to popular destinations such as Kylemore Abbey and the Spiddal Craft Village, attending a lecture at the National University of Ireland Galway, and indeed learning more of the Ireland/U.S. connection by visiting a U.S. multinational company.

A highlight of the fortnight is a full day excursion to the Aran Islands.

Not all activities are in County Galway.

There is a day trip to County Clare that includes a stop at the Cliffs of Moher, and there is another day spent in Dublin with visits to some of the Irish capital’s many delights.

If the program is enjoyed by the participant, if the West of Ireland works its magic, the idea is that the American student feels that he or she is living for the two weeks in a home from home.

This year’s Academy runs July 15 to 28 More at www.CelticIrishAmericanAcademy.com.