WATCH: Irish doctor suggests delaying Christmas for a month due to COVID

Dr. Tomás Ryan claims that Ireland could reach a level of "normality" akin to Australia if lockdowns are extended. 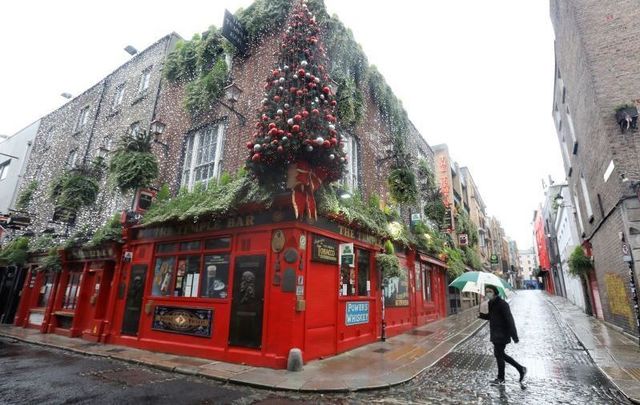 Dr. Tomás Ryan, Associate Professor at the School of Biochemistry and Immunology at Trinity College in Dublin, has called for Christmas in Ireland to be delayed for a month in order to get the most out of the current Level 5 coronavirus lock downs.

As it stands, Ireland’s Level 5 restrictions, which were enacted at midnight on October 21, are set to last for at least six weeks, culminating on December 1.

Dr. Ryan, speaking on Newstalk Breakfast in Ireland on November 11, said: “I think we’re already doing better than a lot of us anticipated and we’ll have to see how they progress.

“I think certainly going at least a few weeks beyond December 1 would be in everyone’s best interest.

“I don’t think we’ve been communicated reasonable expectations from the government on what our Christmas is going to be like. It’s certainly not going to be like Christmases that we normally have anyway.

"The important thing is we’re all in lockdown now, we’re paying a hefty price anyway. We want to make sure that we get the right benefit from it. We won’t be getting that if we have another lockdown in January.”

When asked what the difference is between extending the lockdown and entering a new lockdown in January, Dr. Ryan explained: “If we open up in December, we’ll be in Level 2 or Level 3 restrictions, not Level 1 or Level 0, so it won’t be full freedom. And then we could be back at 1,000 cases a day and then back in Level 5 in January.

He predicted a “yo-yoing” between Levels.

Dr. Ryan continued: “Look at what’s happening right now in most of Australia, life looks pretty wonderful there to me right now, something that we haven’t experienced in nearly a year. And even with the positive news of a vaccine, if we wait for that to return things to normal, we could be waiting another six to nine months.

“I think we can return to a normality that’s quite like life right now in most of Australia by early January, which would mean Level 1 or Level 0 restrictions by January.”

He concluded: “One way of looking at this would be to delay Christmas until the end of January and have a real Christmas and a real party then.”

Dr. Tony Holohan, Ireland’s Chief Medical Officer, said on Tuesday that the final decision of reopening of pubs in Ireland will rest with the government, but he does not expect to recommend Christmas drinks.

Dr. Holohan said: “That is not our advice and it is not the advice I anticipate giving and I am not going to start speculating any further than that on exactly what we are going to say.

“We are going to give what we think is the appropriate advice in relation to what we think are safe and effective measures we think we can adopt and I am not going to speculate one way or another.”

Any measures put in place after December 1 will have to “maintain a very high standard of public health practice,” Dr. Holohan said.

“If we are going to get value out of the measures that are in place at the moment, we will have to maintain a high standard of behaviour at any point in the year.

“But as we have done in the past, when social events if you like have occurred at a point in time, we have given advice in relation to those.

“I imagine, when the time comes, we will give relevant advice in relation to Christmas but we are not in a position to start speculating on what that will be at this point in time.”

Similarly, Higher Education Minister TD Simon Harris, who was previously the Minister for Health, said late last month: “It is unlikely any of us are going to be doing the 12 pubs of Christmas.

“I don’t say that in a flippant way but I think we all know that packed gatherings and the likes are not likely to be on the scene.

“But we are going to have to do it in a careful way and I think people get that in this country at this stage.

“Obviously, we will have to provide clarity, as a Government, on exactly what that looks like, based on public health advice, when we get through this Level Five.”