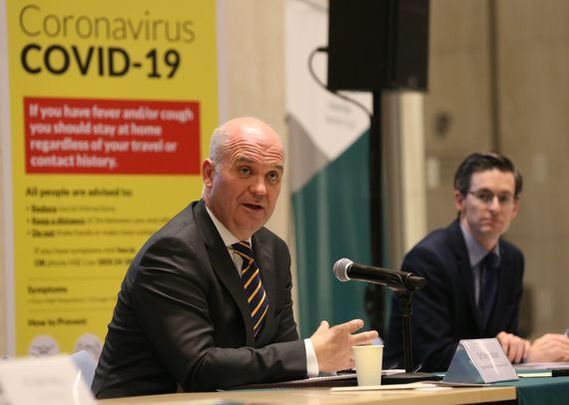 Tony Holohan confirmed that seven suspected cases of the syndrome are being investigated in Ireland. Rolling News

Symptoms include fever, abdominal pain, and cardiac issues and are thought to be caused by a delayed immune response to the coronavirus.

There have been at least 230 suspected cases in Europe and two deaths tied to the syndrome as of Friday evening. Dozens of children have been hospitalized or admitted to ICU with the condition, which is called Paediatric Multisystem Inflammatory Syndrome (PMIS).

More than 80 PMIS cases have been reported in New York with one death linked to the syndrome.

Most children have only experienced minor symptoms, however, and experienced no lung or breathing problems.

The European Center for Disease Control said that a link to COVID-19 had yet to be established but appears likely.

Tony Holohan said that it was a rare condition affecting just 15 out of every 100,000 children but asked Irish doctors to be aware of it and report any suspected cases.

He confirmed that health authorities were investigating seven possible cases of PMIS in Irish children.

Holohan stressed that his warnings were directed solely at doctors and medical staff and not at parents.

He urged doctors to consider reporting PMIS only when other possible and more likely explanations had been ruled out.

"This is about considering when other conditions that might explain these symptoms have been ruled out to consider this possibility.

"We want clinicians to be more suspicious that this could be, in an unusual set of circumstances with a sick child, a possible explanation, and to report that information."

Professor Russell Viner, president of the Royal College of Pediatrics and Child Health in England, said that PMIS was "exceptionally rare" in children.

He urged parents not to be overly concerned by the new syndrome.

Read more: Irish WHO head says COVID is here to stay, world must adapt like with HIV