Raphael O’Carroll and Liam Lynch flew to all nine commercial airports on the island of Ireland to raise money for brain cancer research. 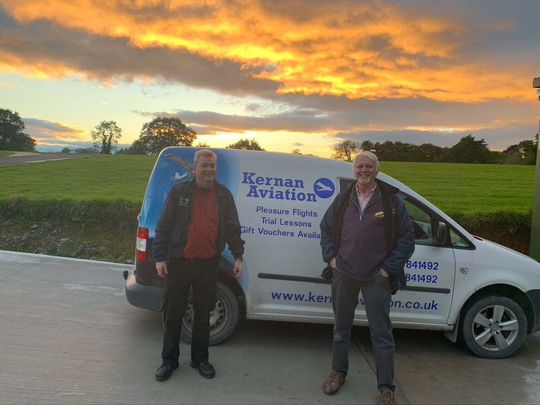 Two Northern Irish pilots have set a new Irish aviation record by landing at every commercial airport in Ireland on the same day in October to raise money for a brain cancer charity.

Raphael O’Carroll, from Tandragee in County Armagh, and Belfast's Liam Lynch landed at ten different commercial airports on the island of Ireland in honor of O'Carroll's daughter Christine, who died from a brain tumor at the age of 31.

The duo spent six hours and 45 minutes in the air on Oct. 11, 2020, first landing at Dublin Airport before heading south to Waterford, Cork, and Kerry. The two pilots then turned north to Shannon, Knock, Sligo, and Donegal before the home stretch in Belfast City and International airports.

O'Carroll and Lynch were raising money and awareness for the Christine O'Connor Research Fund, which supports research into Stage 4 brain tumors - the leading cancer killer of people under the age of 40.

The record-setting flight has raised more than £2,500 ($3,500) for brain cancer research and would not have been possible had it not been for the COVID-19 pandemic, which has caused a downturn in traffic at Ireland's commercial airports.

Lynch and O'Carroll spent more than six weeks preparing for the arduous journey with the help of their third team member, Jacqui Lawrence.

An air traffic controller and student pilot, Lawrence helped Lynch and O'Carroll plan the logistics of the trip and worked on securing the necessary permissions from all nine airports. She also made plans for a 600kg light sports aircraft would mix with the "big boys" at Ireland's main international airports.

However, the flight still relied on good weather throughout the country and had to be delayed on several occasions due to bad weather at certain airports.

On Oct. 11, the flight was finally able to go ahead thanks to clear skies all over Ireland. O'Carroll and Lynch quickly sprung into action and confirmed a 9:03 a.m. landing slot at Dublin Airport, allowing them to simultaneously complete a record breaking journey and commemorate the memory of Christine O'Carroll.

Dublin (All Irish Airports) from Brendan Digney on Vimeo.