Alex Murdaugh was fixing a flat tire on the side of the road when an unknown suspect shot him in the head from a passing pick-up truck. His wife and son were murdered in a double shooting in June. 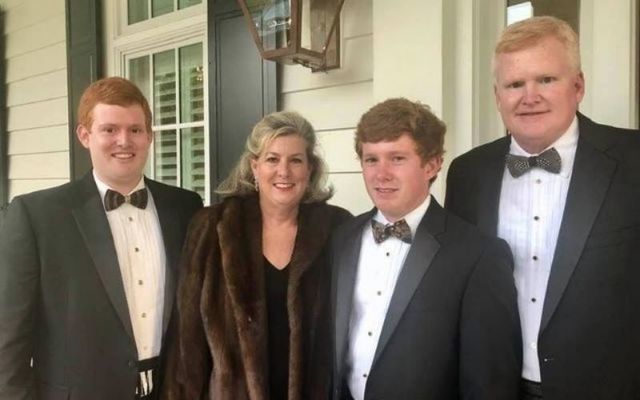 Alex Murdaugh, right, with his family at their Islandton home. His wife Margaret and son Paul (center right) were murdered three months ago. Facebook

A prominent Irish American lawyer was shot in the head in a roadside shooting in South Carolina on Saturday just three months after his wife and son were murdered in a double shooting at his home.

Alex Murdaugh, 53, was fixing a flat tire on the side of the road in Hampton County, South Carolina when an unknown suspect shot him in the head from a passing pick-up truck, according to family friend Jim Griffin.

Murdaugh received a "superficial gunshot wound to the head" during the incident, according to the Island Packet.

Murdaugh, a prominent lawyer in South Carolina, was airlifted to the Memorial Health University Medical Center in Savannah for treatment and has since talked to family members over the phone, according to multiple sources.

In a statement released on Saturday evening, the Murdaugh family said that they expected the 53-year-old to make a full recovery but said that they had "suffered through more than anyone family can ever imagine".

Alex Murdaugh's wife Margaret, 52, and his son Paul, 22, were found dead on June 7 near dog kennels on the family's property in Islandton in Colleton County. Both had suffered gunshot wounds, prompting state investigators to classify the case as a double homicide.

The South Carolina Law Enforcement Division is still investigating the double killing and has not made any arrests.

Family friend Jim Griffin said that the latest development was "very disturbing" and told the Island Packet that the family was trying to "figure out what the hell is going on".

Alex Murdaugh pledged a $100,000 reward for information leading to a conviction against whoever killed his wife and son, while his brothers said that the family was "hurting" in the wake of the double murder.

At the time of the double murder, Murdaugh's son Paul was awaiting trial on charges related to boating under the influence and killing a 19-year-old woman in 2019.

Paul Murdaugh was shot in the arm and the head with a shotgun, while his mother Margaret was shot with an assault rifle.

The double murder took place in a small town made up of around 70 residents and has provoked national interest due to the fact that the Murdaugh have formed a legal dynasty in the area over the past 80 years.