The Irish American Football Association in Ireland has spent nearly twice it's annual grant in legal fees since 2012. 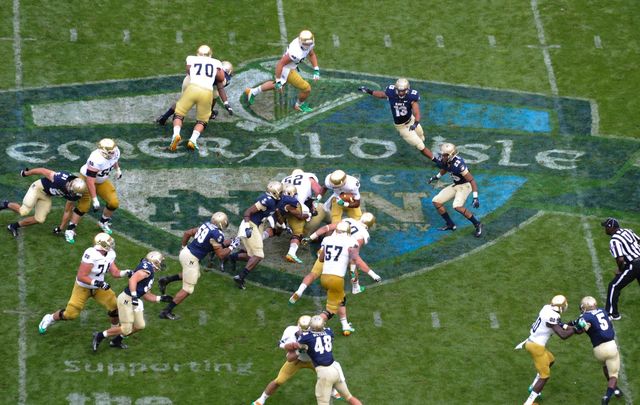 IAFA looks forward to a strong relationship with future organizers

The Irish American Football Association said in their annual general members' meeting last week that it has spent €40,000 on legal fees since 2012.

The Irish Examiner reports that in 2012, the IAFA threatened legal action against the US Navy ahead of its Aviva Stadium game with Notre Dame, claiming that Navy had failed to honor the terms of a sanctioning agreement it entered into with the IAFA ahead of the game.

In 2016, IAFA initiated arbitration proceedings against the organizers of the Boston College and Georgia Tech football game which took place at the Aviva Stadium in September of that year.  The arbitration focused on legal fees the IAFA said it was owed by the match organizers. There were questions over whether the IAFA — as the governing body for the sport in Ireland — would sanction the game.

While both the 2012 and 2016 legal situations were resolved and the two football matches went ahead, the total sum of legal fees was only revealed at the annual meeting last week.

Now, the IAFA says it is looking forward to “collaborative relationship” with organizers looking to bring American football games to Ireland. 2020 will see a five-game series of American college football in Dublin, but the IAFA has said it “does not anticipate spending anywhere close” to the legal fees it has previously.

Read More: NFL commentary with an Irish accent? There's a first time for everything

“Sport Ireland assists recognized National Governing Bodies of Sport to develop sustainable and effective structures to facilitate increased numbers of both participants and volunteers across a wide range of sports,” it said.