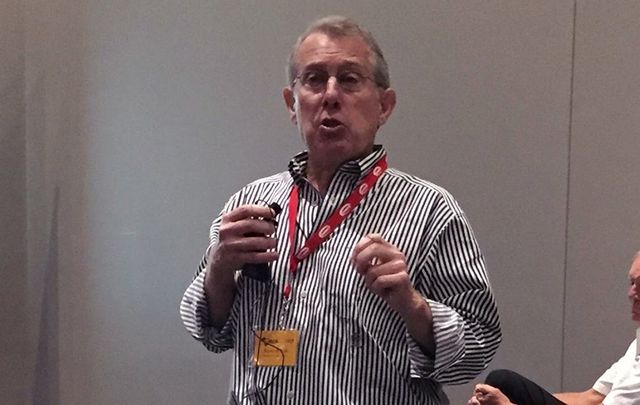 Terry O’Neil, founder/CEO of an organization called Practice Like Pros.

Long before Terry O’Neil was a mover and shaker in the National Football League -- as a producer on Monday Night Football and an executive with the New Orleans Saints -- he had a tough decision to make.  He was raised by “devout Irish Catholic” parents in Natrona Heights, Pennsylvania, a steel town 30 miles up the Allegheny River from Pittsburgh.

O’Neil was an exceptional student and had been offered a prestigious scholarship to Vanderbilt University.  There was only one problem: O’Neil’s mom badly wanted him to go to Notre Dame.

“Nobody in our extensive Irish clan had ever attended,” O’Neil told me in a recent e-mail exchange.

After graduating from Notre Dame, O’Neill went on to work for decades in network TV sports as well as the NFL.  So he has learned a thing or two about the beauty -- but also the perils -- of sports, particularly football.

These days, O’Neil is the founder/CEO of an organization called Practice Like Pros.  The group’s mission is to change youth football so that young players do not suffer so many injuries.

O’Neil notes that almost 60 percent of head trauma in high school football takes place in practices rather than games.  An A-list roster of NFL Hall of Famers as well as medical experts have supported Practice Like Pros’ reforms, which range from banning full tackles for grade-school kids to cutting back on off-season practices.

In a remarkable bit of timing last week, O’Neil’s group announced a new fundraising campaign to raise money for its youth football reforms as well as the first-ever scientific research of catastrophic brain injury in high school football.

But this was not the only big-time news in the world of football and hard hits this week.  There was also the Boston University study that noted that “athletes who began playing tackle football before the age of 12 had more behavioral and cognitive problems later in life than those who started playing after they turned 12,” as The New York Times put it.

Then came the news that disgraced NFL star Aaron Hernandez, the New England Patriots wide receiver who was eventually convicted of murder, was suffering from “severe” chronic traumatic encephalopathy when he committed suicide.  CTE is the same condition many other former pro football players are suffering from, including Junior Seau and Dave Duerson, who also committed suicide.

The Hernandez family has since filed a multi-million dollar lawsuit against the NFL.  Some believe that the extent of head injuries in amateur and pro football could threaten the very future of the sport.

Given all this, you would imagine that even Donald Trump would know that right now would not be the best time to ruminate in public on the state of the NFL, with regard to hard hits.  But no, there was the president this past Friday at a speech in Alabama saying what football needs right is…more hard hitting! (Not to mention, of course, his calling for players who kneel for the National Anthem to be fired or suspended).

Even the commissioner of the NFL blasted the president, who might consider that star athletes dying young and being diagnosed with crippling brain diseases may actually be the thing that is hurting the game.

As for O’Neil, he continues spreading the word that less hitting at the youth level of football will make for healthier, stronger, children.

“Most injuries occur when players are taken to the ground,” he said.

NFL Hall of Famers such as legendary coach Mike Ditka and former stars Ronnie Lott, Warren Moon and Tony Dorsett are among those who have endorsed O’Neil’s reforms.  To learn more about, or contribute to O’Neil’s campaign, go to practicelikepros.com.