Ireland swamped by heaviest rain in a hundred years

It’s really saying something when Irish people tell you there’s been a lot of rain. 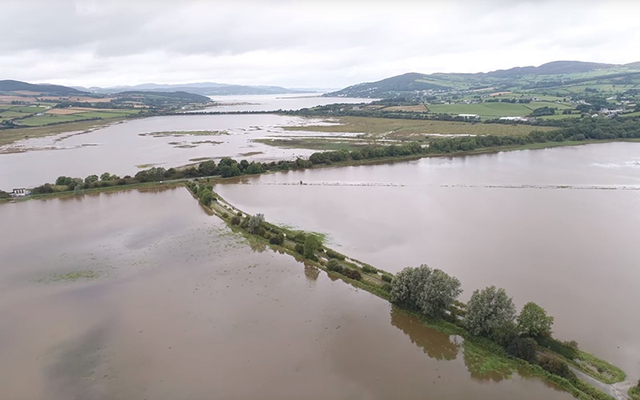 Aerial shot of flooding in Donegal, in the Burt/ Inch area of the county near the border with Derry. Eye In The Sky / Paul McMenamin

The northwest of Ireland has been submerged by the heaviest rainfall in 100 years.

2,500 homes were left without power but so far there have been no reported fatalities or injuries as a result of the unusual weather.

At the height of the tourist season flights in and out of Derry Airport were canceled on Wednesday as much of the airport was underwater; no word yet as to when they’ll resume.

City of Derry Airport was also hit by flooding overnight, as a result all flights have been cancelled #Derry #NorthWestFloods pic.twitter.com/oV9HR7BbqD

Firefighters said they had responded to 85 separate calls for help and the coastguard was so overwhelmed with pleas for assistance that helicopters from as far away as Scotland and Wales were scrambled and flown in for assistance.

At one point Northern Ireland’s firefighters were receiving an emergency call from the public every 45 seconds and in total 120 people in the north had to be rescued from their cars or homes.

Donegal’s Inishowen peninsula (Ireland’s most northerly point) was particularly badly affected and locals said normally quiet country roads turned suddenly into raging rivers as a cascade of water thundered down from the heavens. Two bridges that lead into the town of Carndonagh collapsed and it’s not yet known how long they’ll take to repair.

Read more: Discovery of 20-year long rainfall in Ireland in 2345BC

One woman told the Irish Independent she and her husband had driven over a bridge mere minutes before it crumbled; the bridge finally buckled under the weight of a passing tractor but the driver managed to escape uninjured.

"A garden wall collapsed in front of us on the road and we had to do an emergency stop. It is the craziest flooding I have ever seen. The roads turned into Niagara Falls. I've never seen anything like it in my life."

Local councillor Bernard McGuinness said it was an extraordinary sight to behold.

“It was a weather event not seen here in living memory with 70mm of rain in just a few hours,” he told RTÉ.

A dramatic night of weather, with heavy #rain and #thunderstorms, especially across Northern Ireland and W Scotland - here's how it unfolded pic.twitter.com/Bq4QtvgIRT

Kevin Boxer Moran, Minister for Public Works, today journeyed to Donegal to see and assess for himself the damage with an official response due shortly.

In Northern Ireland, those whose homes have been flooded are eligible for an emergency grant of $1,300 to help with repairs.

Here is some incredible aerial footage of flooding in Donegal, in the Burt/ Inch area of the county near the border with Derry: