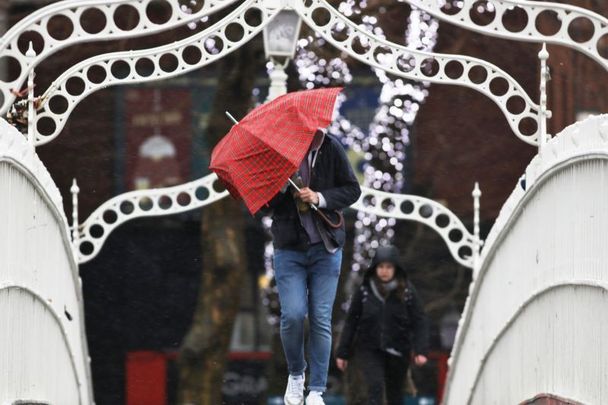 January 13, 2020: A person on the Ha’penny Bridge in Dublin as Storm Brendan hits Ireland. RollingNews.ie

Ireland's storm names for the 2022/2023 winter season have been unveiled by the Irish weather service Met Éireann.

Met Éireann and its counterparts in the UK and the Netherlands have collaborated to name the upcoming winter storms, with each weather agency contributing names suggested by members of the public.

Met Éireann and the UK Met Office kickstarted the initiative in 2014 and were joined by the Royal Netherlands Meteorological Institute (KNMI) in 2019.

The 2022/2023 list contains distinctive Irish names such as Cillian, Íde, and Ruadhán, in addition to several other names that are popular in Ireland.

The list follows the male-female pattern established by the US National Hurricane Center in the 1970s.

In line with international conventions, storms beginning with the letters Q, U, X, Y, and Z are not used. Controversial names, including the names of public figures, are also not used.

According to Met Éireann, storms are named when could cause "medium" or "high" impacts in one of the three countries and help provide consistent, authoritative messaging in times of severe weather.

The weather service that is expected to be the worst affected by an incoming storm is given the right to name the storm based on the predetermined list.

Other European weather services also name storms and it is generally accepted that if any weather station names a storm, the rest of the weather stations in Europe will use that name.

Met Éireann's Evelyn Cusack said in a statement that naming a storm is an important tool for warning the public about the danger of severe weather events.

"The annual unveiling of the new storm names on the 1st September creates greater public awareness and, crucially,  during the winter when a storm is named for its potential Orange/Red impacts, it creates a more impactful public ‘call to action’ helping to save lives and property," Cusack said,

"During past storms, the public have responded positively to the advice given by experts and this new roster of names will help us to continue to mobilize everyone to ensure we all work to minimize the effects of future events."

Seven named storms in a season is the joint 2nd (with 2019/20) lowest number of named storms since the project began.