Ireland will not enter Phase 4 of its Roadmap to reopening society and the economy due in part to the R number rising above 1. 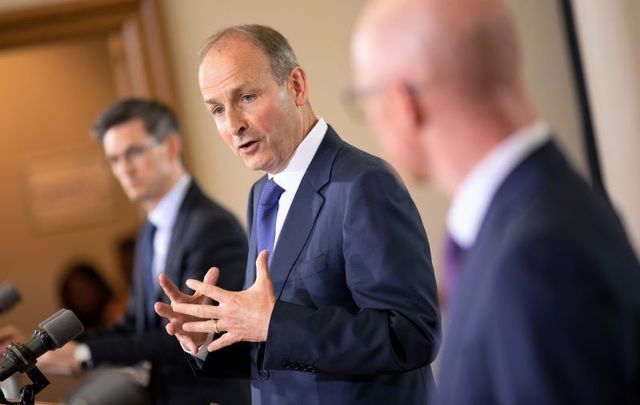 Taoiseach Micheál Martin discussed face coverings in shops, a delay in the reopening of pubs, and a travel "green list" during a press briefing on Wednesday

Phase 4 of Ireland's Roadmap to reopening society and the economy has officially been delayed from July 20 to August 10, it was announced on Wednesday.

The news comes after the Roadmap was accelerated last month. The Roadmap, which has since been revised,  was officially unveiled by former Taoiseach Leo Varadkar in May.

Speaking during a press briefing at Dublin Castle, Taoiseach Micheál Martin said: “My government and I have received advice from the National Public Health Emergency Team. The concern about the rise in the number of cases over recent weeks is very real. The R number - which we have all become familiar with - has risen above 1 in this country."

Dr. Ronan Glynn, the acting Chief Medical Officer for Ireland’s Department of Health, later said during the press briefing that the R number in Ireland is now between 1.2 and 1.8.

Martin continued: “The international situation, with almost a million and a half cases reported in just the last week, represents a growing worry.

“Taking these factors into consideration, today the cabinet agreed that the current public health measures should remain in place until the 10th of August.

“We agreed that the country will not be progressing into Phase 4 of the revised Roadmap for reopening society and business.

“The priority now must be to get that R number back below 1. By doing so, we will give ourselves the best chance possible to fully reopen our schools in late August.

“It is also a critical step in the process of making sure that essential non-COVID healthcare continues as quickly as possible.

“With this goal in mind, I would now like to set out five steps that the government has decided we must now take to further protect public health.

Details on enforcement and penalties “will be formulated,” Martin said.

He continued: “Given the risk of the spread of infection associated with social gatherings, as well as the evidence of outbreaks from bars and pubs in other countries, pubs, bars, hotel bars, nightclubs, and casinos will remain closed until the 10th of August.

“Pubs and bars which are currently operating while serving food can remain open once they’re fully compliant with the public health guidance.

“There is evidence that unrestricted house parties have led to a rise in recent outbreaks of the virus. It is now recommended that social visits to people’s homes will be limited to a maximum of 10 visitors from no more than four other households.

“We are continuing to advise against all non-essential foreign travel. The global situation is deteriorating and there are growing concerns about the re-emergence of the virus in Ireland as a result of overseas travel.

“I and all my colleagues have had a lot of correspondence on this matter, and we’re very acutely aware of the anxiety across the country at the prospect of visitors from various hotspots traveling freely within the country.

“In response to these very valid concerns, a number of further actions will be taken.

“The government will publish a green list on Monday the 20th of July. Countries which have a similar risk of infection as Ireland will be included on this list. However, I want to emphasize the fact that we will continue to urge people against unnecessary foreign travel. This list will be kept under fortnightly review.

“There will be an increased presence of compliance staff and increased communications at our ports and airports to make incoming passengers aware of their obligation to fill out Passenger Locator Forms correctly, and their requirement to restrict their movements for 14 days.

“Work is underway to move the Passenger Locator Form information online so that passenger information is more easily accessible for follow up checks and calls by an expanded tracing team.

Martin said that a “renewed communications campaign” will be launched to ensure “maximum public awareness” of the new requirements.

In conclusion, the Taoiseach said: “I understand how difficult the journey so far has been. All of us have had to make changes in our lives, and too many of us have had to deal with the terrible grief of lives cut short. I know that some of the steps I am announcing this evening will come as a disappointment to some.

“I know that even though this delay in Phase 4 of the country’s reopening will be disappointing, it will also be understood for what it is: protection of the progress, the undoubted progress, we have made to date, and our best approach at further sustainable progress in our education and healthcare sectors in the autumn.”

You can watch the entire press briefing from July 15 here:

You can learn more about Phase 3, which Ireland is currently in, and the upcoming Phase 4 on the Irish government's website here.