Is Ireland on the brink of an Irish passport emergency?

Minister for Foreign Affairs Simon Coveney has told the Dáil that the Passport Office is currently experiencing "a very high level of demand", with up to 1.7 million passport applications expected in 2022. 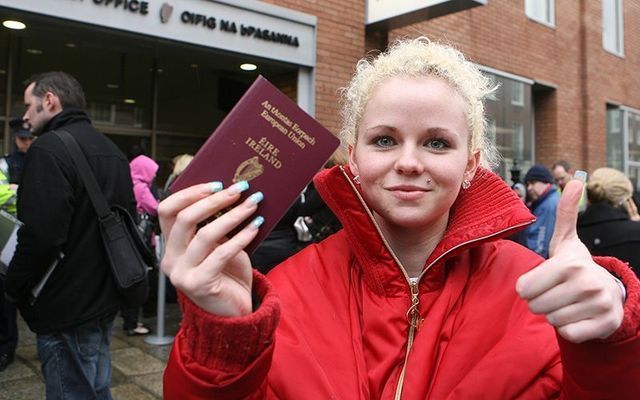 Irish passport: a record 1.7 million people are expected to apply for a passport in 2022. Rolling News

Ireland is reportedly on the brink of a "passport emergency" amid a scramble to book overseas vacations in 2022.

Minister for Foreign Affairs Simon Coveney has told the Dáil that the Passport Office is currently experiencing "a very high level of demand", with up to 1.7 million passport applications expected in 2022.

Coveney said that there are currently 777 staff members in the Passport Office to deal with the demand, an increase of 70% compared to June 2021.

He added that staff are receiving extensive training to ensure that they can process the increase in demand.

The Irish Examiner reports that the current passport backlog stands at 113,000 applications due to Covid-19 lockdowns, while the Passport Office is reportedly looking to take on further "significant numbers" to help cope with the demand.

Fine Gael Senator Garret Ahearn has called for the Passport Office to open seven days a week until the backlog has been cleared.

Ahearn also called on Irish people to ensure that their passport is in date before booking trips abroad.

☀️ 🏊‍♂️ Summer is fast approaching and many people will be planning a holiday abroad.@GarretAhearn is encouraging you make sure that your passport will still be in date and valid for travel.

Meanwhile, Fianna Fáil TD Dara Calleary called for a Passport Office to be opened in the west of Ireland to help deal with the surge in demand.

Coveney said that a new office is operational in Swords in North Dublin, adding that it can accommodate up to 140 staff members.

He said that 99% of online child renewals are completed within 15 days but said that first-time applicants "do take a lot longer".

"We are looking to bring down turnaround time for first-time applicants as well as renewals," Coveney said.

He advised people to submit their passport applications "early", while an advertising campaign is currently underway to remind people.