The Committee to Save Ireland's Great Hunger Museum will host a rally on October 30 in Hamden, Connecticut. 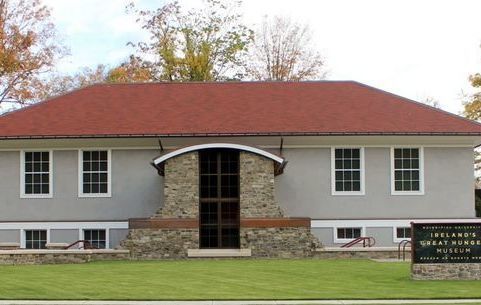 The Irish Great Hunger Museum in Hamden located on the grounds of Quinnipiac University.

Supporters of Ireland's Great Hunger Museum in Connecticut will hold a rally on Saturday, October 30 to protest against Quinnipiac University's unexpected decision to close the institution in August this year.

The Committee to Save Ireland's Great Hunger Museum will host a salute to the museum on Saturday, October 30 between 1 p.m. and 5 p.m. on Woodruff Street in Hamden, Connecticut.

The event is free and open to the public and will feature street art, live music, and other festivities.

Saturday's salute aims to call together a peaceful coalition of voices to save the museum and its broad collection.

The Committee to Save Ireland's Great Hunger Museum was formed in response to Quinnipiac University's unexpected decision to close the beloved museum in August and reportedly give its collection away.

The committee, which is backed by several prominent Irish-American groups, aims to convince the university's president and board of trustees to reverse the decision and reopen the museum. Failing that, the group is seeking to ensure that the museum's expansive collection is not broken up and sold for profit by the university.

Meanwhile, Connecticut Attorney General William Tong has opened an inquiry into the decision to shutter the museum.

A spokesperson for the Attorney General's office told the Quinnipiac Chronicle said that Tong acted following a plea by Irish-Americans asking for an investigation into the closure.

A letter to Tong "stated that the attorney general should look into the closure because it involves selling or distributing the museum’s collection, which is in the public interest".

"Furthermore, donors want to know what happens to their gifts of artwork and money to a museum that is now closed," the letter continued.

Tong's office has already reached out to Quinnipiac University to inquire about the matter.

Quinnipiac University spokesperson John Morgan said that the university was "being cooperative" with the inquiry and said that it is not selling any of the collection.

"We are committed to finding a solution for display of the collection that will ensure it remains publicly accessible, advances the museum’s original mission, and preserves the story of the Great Hunger."

Morgan has stated the Famine museum raised only 25 percent of the funds needed to keep it operating. Critics have said given the pandemic, that is not surprising. 1,300 Irish have signed on to a protest letter.