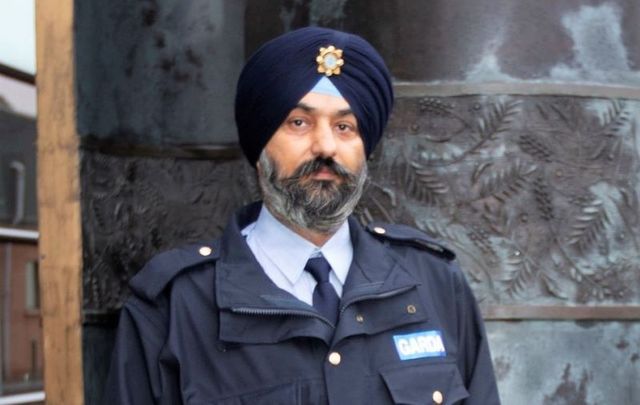 Ravinder Singh Oberoi is the first Sikh person to become a member of Ireland’s Garda Reserves, the volunteer part-time section of An Garda Síochána, the national police force of Ireland.

Oberoi, an IT professional who arrived in Ireland in 1997, told The Irish Times that his induction into the Garda Reserves on January 19 was “a very happy end to a long journey.”

In 2007, after completing most of his training to join the Garda Reserve, Oberoi learned that he would not be permitted to wear his turban as part of the Garda uniform. He brought the matter before an Equality Tribunal and the High Court, which ultimately ruled that An Garda Síochána was not guilty of employee discrimination as Garda Reservists were legally volunteers rather than employees.

Oberoi now says the decision was “very disappointing” and “went against the values and ethics that an Garda Síochána promote."

However, in 2019, An Garda Síochána reserved course and said in a statement: “In order to encourage candidates from minority communities, An Garda Síochána will consider alterations to the Garda uniform to take account of religious and ethnic requirements subject to operational, and health and safety obligations.

Commissioner Drew Harris said at the time: "We hope that this will encourage people from minority communities to join An Garda Síochána. We want to demonstrate to them that An Garda Síochána is an inclusive employer that is serious about becoming more diverse.”

Following An Garda Síochána's reverse course in 2019, Singh participated in a refresher course in summer 2020 and operational training on the beat in Dublin last autumn.

Upon being inducted this month, Oberoi told The Irish Times: “After 14 years, it was a proud moment as a Sikh man to be able to wear a turban as part of the uniform.”

"It’s a great honour to be able to call this country my home and now to be accepted in the attire I wear.”

India’s Embassy in Ireland congratulated Oberoi on his accomplishment which they say "paved the way for more multicultural representation in the Garda force:"

In a statement issued on January 19, An Garda Síochána said it had attested 71 Garda members and 69 Garda reserves, including Oberoi, “to support the policing of Level 5 restrictions.”

Oberoi was among the 69 Garda reserves who completed training to prepare them to contribute to front-line policing including public compliance with health guidelines and regulations. In addition, a re-deployment of uniform personnel from administrative roles to front-line operational duties took place.

Commenting on the inductions, Garda Commissioner Drew Harris said: "A very important aspect of the work of An Garda Síochána throughout the pandemic has been day-to-day engagement with the most vulnerable. Often Gardaí have been people’s only interaction or contact, their only support. The newly attested Garda members and reserves will help support this work and that no one in need will feel as though they are dealing with this alone.

"Crime has continued during the pandemic, and the dedication and professionalism of Gardaí has allowed us to maintain our operational pace over the past ten months. At all times, Gardaí across the country have continued to focus on preventing and detecting criminality.

"Garda members regularly face dangerous, uncertain situations in order to assist and protect the public. It takes true mettle to come forward at a critical period in the country’s fight against this virus and be prepared to give it all to protecting the public from the frontline.

"The 69 Garda reserves have willingly committed their time to support the ongoing efforts to keep people safe and will form an integral part of our policing effort moving forward.

"The newly attested members and reserves will help ensure community policing, crime detection and prevention, as well as the policing of public health regulations are all efficiently conducted."