Ireland from outer space is truly an amazing jewel

Canadian Commander Chris Hadfield wrote his memories of Ireland from space for the Irish Hospice Foundation for their book called “The Gathering - Reflections on Ireland.” 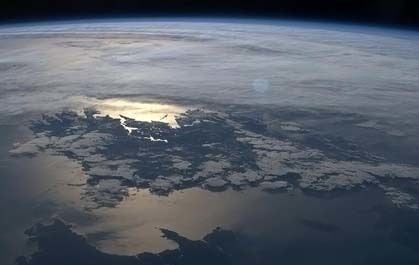 Canadian Commander Chris Hadfield retired in 2013 after 35 years as a pilot and astronaut. He served as a Commander of the International Space Station. He wrote his memories of Ireland from space for the Irish Hospice Foundation for their book called  “The Gathering - Reflections on Ireland.”

The first glimpse you get of the Earth after you launch in a space shuttle from the Kennedy Space Center in Florida is the green of Ireland. It is a wonderful sight when the sun shines through the cloud and you see a green, green jewel, after all the blue of the Atlantic.

Space can be a lonely place, but it was made less lonely for me as I connected with so many Irish people during my last mission before retiring as an astronaut. Looking down from my perch in space, Ireland was just a tiny speck on the western fringes of Europe, yet it managed to have a huge impact as I orbited the earth.

Everyone knows someone from Ireland. I grew up with an Irish boy in my native Canada, Seán Kennedy, one of my best friends. While I don’t have my roots in Ireland, I have a strong connection, as our daughter Kristin is studying in Trinity College. On visits, we hiked in the hills, saw historic towers and drove through pretty villages. I drank my favorite beer, Guinness, in Irish bars. And I was amazed to see palm trees growing in parks in Dublin.

When I was in orbit on my last space flight I tweeted a picture. I wasn’t sure if it was an Irish, Welsh or English port city, but I was quickly advised by those who saw it that it was Dublin. This sparked an instant and strong connection between me and the people of Ireland, divided as we were by over 200 miles. I found this amazing, like meeting a friend for the first time. It was a friendship that flourished and developed – a connection from space that just grew and grew.

I tweeted more pictures from Ireland during my mission: the sweeping coastline of Cork; Thunder Rock on the western edge of Ireland, with the Dingle Marina visible; and Sligo. I played The Road to Sligo many times with an Irish band, but this was the first time I had seen it from space.

Over the years I have played a lot of Irish, folk and Celtic music with different bands. Through music, you get a feel for a region and its people. Growing up in Canada I lived on an isolated farm, and every Saturday night, on a black-and-white TV with rabbit ears, we watched a band called The Irish Rover, and I think that is where my passion for Irish music began.

I love the Dubliners, Van Morrison, and Christy Moore. One of my favorite songs to sing is Ride On. In June, on my last night with NASA in Houston, Texas, before retiring, I played a Van Morrison song.

While my family is not from Ireland, I feel aligned to Ireland in spirit. I was really proud to have tweeted from space in Irish. Over the years I learned to speak a few languages – French, German and some Russian, as I worked as an astronaut in a Russian spaceship. When I started to engage with so many people from Ireland, I decided to tweet in Irish from space and got help from my son, Evan, and from a friend of my daughter, Kristin.

Sharing emotions and language with the Irish people was phenomenal. The warm gush of acceptance that I experienced on this space flight was special. People all over the world wanted me to take a picture of where they were from – but interest was strongest from Ireland. The connection became a two-way one between me and them, back and forth.

I think Irish people have a true understanding of who they are in the world. I know Ireland has been through some tough times in recent years. Kristen is doing a Ph.D. in psychology; she has been focusing on families and schools as part of her studies, and she has shared with me what is happening in the country.

A lot of young Irish people have emigrated, but it is possible to be proud and to remember where you are from, yet still live somewhere else. I have done that in my life, as I have lived away from Canada for many years. But you can never take away that feeling of home.

As I write this, myself and my wife Helene are driving back to Canada, returning home for the next phase of our lives. We said goodbye to Houston, Texas, and to all our friends at NASA and are looking forward to returning home and to what lies ahead.

I will continue to play with my band, Vandella, and to play Irish music.

With the huge response I got from Irish people, I know that when I go back I will have an entire land of friends to visit. I will be able to go into a pub or knock on any door and I will be welcome. I suppose I can boast that I have a unique perspective on Ireland, seeing it and connecting with it as I did from space on my last mission.