Cuban American journalist asks why “a man who went to Cuba to kill and failed in everything he did”.is honored. 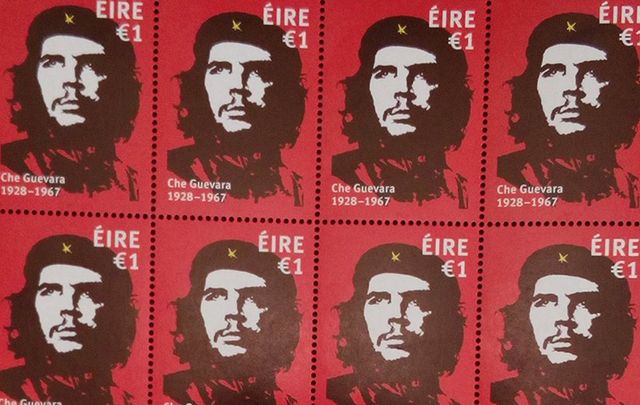 A Cuban-American radio host and Irish politicians have called on An Post, Ireland’s postal service, to explain their decision to launch a €1 stamp featuring a portrait of Che Guevara by Irish artist Jim Fitzpatrick.

Ninoska Perez Castellón, a prominent member of the Cuban exile community in Miami and radio host, told RTE’s "Morning Ireland" show, the stamp honoring Che Guevara would “celebrate a man who slaughtered so many people.”

"Would you be offended if Germany put Hitler on a stamp?" @ciarakellydoc now on @NewstalkFM on the Ché Guevara stamp controversy pic.twitter.com/fPKsdBS1SH

An Post’s plan was announced on Friday to coincide with Monday’s 50th anniversary of Che Guevara’s execution (October 9).

Castellón, who works at Miami 710 Radio, said regardless of the fact that the stamp was an iconic image, created by an Irish artist, it represented “a man who went to Cuba to kill and failed in everything he did.”

She added that there are many families in south Florida whose fathers were killed by Che and said his world-famous profile was “propaganda myth created by communism.”

While speaking with the Irish radio station it was pointed out to Castellón that the Irish American President Andrew Jackson’s image had been used on the $20 bill in the USA despite his controversial history. She pointed out that Jackson, also of Irish descent, had not been a terrorist.

Castellón said, “I don’t know what people find to celebrate about Che Guevara.

“I’d love to see that stamp abolished. What reasons did they have to put Che Guevara on a stamp?

“What does Ireland think they are doing putting Che Guevara on a stamp?"”

Guevara helped Fidel Castro overthrow the US-backed dictator Fulgencio Batista in Cuba. He has been labeled a mass murderer and killer by his critics both in Cuba and abroad. It is claimed that over 16,000 executions and 100,000 political imprisonments have taken place since Guevara and the Castro brothers took over Cuba in a bloody political coup in January 1959.

Guevara was eventually executed by the CIA-assisted Bolivian army on October 9, 1967.

A quote from Ernesto Guevara Lynch – “In my son’s veins flowed the blood of Irish rebels” – will feature on the cover envelope which will accompany the new Irish stamp.

While speaking to RTE Castellón pointed out that just three weeks ago Aer Lingus removed Jim Fitzpatrick’s painting, the same portrait of Che Guevara from Miami International airport following objections from travelers. The portrait had featured among an exhibition of figures of Irish descent in the airport.

Fine Gael Senator Neale Richmond also said the decision made by An Post to print the new stamp was “totally objectionable.”

Richmond wrote to Ireland’s Minister for Communications Denis Naughten asking for an explanation for this “terrible” decision and asked if Pol Pot, the communist Khmer Rouge leader in Cambodia, and Romania’s Nicolae Ceausescu, would also be acceptable subjects for special Irish stamps.

I suppose the Irish Post Office is now planning their Hitler and Pol Pot stamps.
Get the whole collection!https://t.co/bB06z5CGZY

In his letter to Naughten, Richmond questioned, “What procedures were followed to decide to commission this stamp?”

“Although Che Guevara seems now to be classed as a romantic revolutionary figure and that some of his political ideals might be shared by some in this country, it is my belief that he is most definitely not a suitable candidate for such an honor.”

An Post, the Irish postal service, has issued a stamp of mass murdering Argentinian Marxist, Che Guevara. Ask your local PO not to stock it pic.twitter.com/jRDbTcxv0P

Conservative councilor Patrick Rochford wrote, “Absolutely disgraceful that An Post’s are having a Che Guevara stamp honoring a mass murderer.”

The artist behind the portrait of Che featured on the new Irish stamp, Jim Fitzpatrick, told RTE’s Six One news on Monday that he considered the Cuban revolutionary a martyr.

"He remains a hero to me," Dublin artist Fitzpatrick said.

"It's been 50 years, has been since I [created the image] and I haven't wavered in my extraordinary admiration for him and for what he tried to do. He did not succeed, but he tried."

When asked about the hundreds of people who died at Che’s command Fitzpatrick compared it to acts committed during the Irish Civil War.

“I'm a pacifist, I don't believe in the death penalty, but in civil war brutal things happened.

“We saw it in our own country with the executions by our Irish government of the Republicans.

Thank you George! #COYBIG!
Did you catch this RT piece on Jim Fitzpatrick? ‘Viva Che!’ pic.twitter.com/hOYczd4TJx

"[Che Guevara] is a man who is disowned by not just Soviet Communism, disowned by his own country because he condemned Soviet imperialism as well as American imperialism .

"He could have sat happily as the governor of the central bank of Cuba and lived happily ever after. He gave it up to fight for the poor and dispossessed in the poorest part in Latin America where he had no support.

"To me he was a martyr who gave his life where he could have sat back happily ever after, living a life of luxury."