Over 50 major gorse fires have occurred in Donegal since April the Irish Wildlife Trust (IWT) said this week. 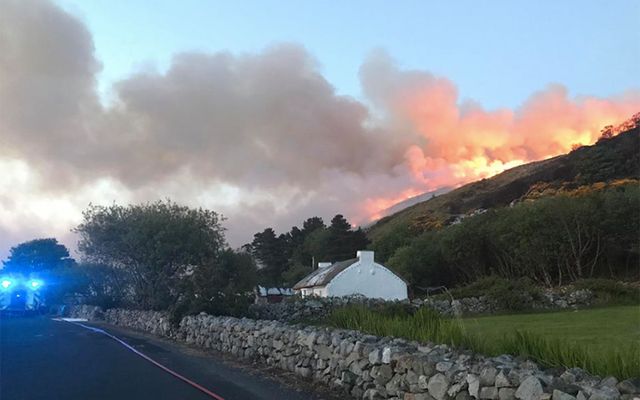 Over 50 major gorse fires have occurred in Donegal since April the Irish Wildlife Trust (IWT) said this week. The organization is now calling for stricter punishments to be given to farmers who intentionally set fire to their own land in a bid to receive a government subsidy.

In Donegal wild gorse, a yellow flowering plant that flourishes especially on dry sandy soil, flourishes on the wind blown hills and mountains.

But it quickly eats into the land and for decades it has had a direct economic impact on the local farmers: they lose a valuable government subsidy if their land is considered ungrazeable due to it.

To get it back that to grazeable condition there’s only one thing that works quickly and that’s fire. Every year during dry spells of weather coupled with a strong breeze the hills are set ablaze.

Local communities have endured the big burns for decades but it appears their patience may be coming to an end. The sheer scale of the devastation is increasing yearly, alongside the threat to nesting wildlife and to the nearby homesteads that these infernos represent.

This weekend members of the Buncrana Fire and Rescue Service in Inishowen got fourteen hours of sleep over four days of fighting the big burns. Above them, the giant plumes of smoke could be seen from passing airplanes and even from space.

A MODIS Aqua satellite image of Ireland, taken at 1:55 P.M. Irish time on Sunday, May 1st, 2011 showed the devastation as seen from space in recent years, highlighting the ongoing damage to the environment that these big burns offer.

Not all of the fires are started intentionally, authorities say. Sometimes a discarded cigarette or a neglected barbecue can set off a major burn with devastating consequences for these areas of outstanding natural beauty.

Left behind are post-apocalyptic landscapes that seem to have their origins in nightmares.

Some of the damage from the fire on patch yesterday. Large area of gorse bank up in smoke... pic.twitter.com/YV58H08KQ3

But the growing hazard to the life and limbs of already hard pressed fire crews, and the vulnerable homes in the fire’s path, are encouraging authorities to suggest that anyone who witnesses a blaze being set should call the police.