Dramatic footage as wildfires engulf Ireland after a dry spell

A recorded 15 wild fires were sparked in Ireland last weekend, eight in areas protected for conservation. 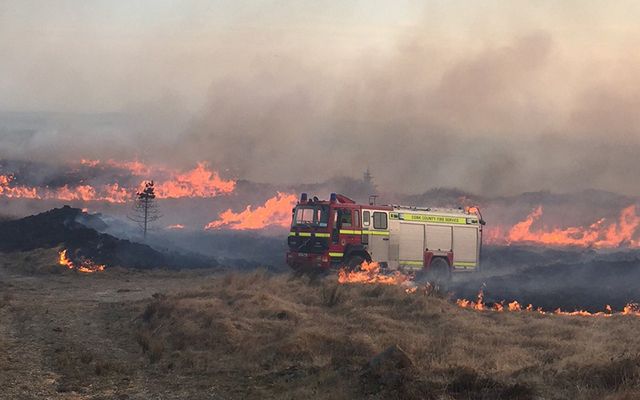 A respite from the rain is typically greeted with delight in Ireland, but the dry spell this past weekend also had some devastating consequences.

The first dry spell of spring has seen a surge of wildfires across Ireland. Since Friday, the Irish Wildlife Trust (IWT) recorded 15 wildfires from counties Cork, Kerry, Waterford, Galway, Donegal, Louth and Mayo.

5 mins of dry weather and the matches are out?#Dunmanway #Bantry and #macroom crews at #forest fire nr Dunmanway pic.twitter.com/AK1GAJXr8s

Eight of these were in areas protected for nature conservation – all are illegal, as setting fire to vegetation is prohibited between March 1 and August 31 each year.

The dry weather leaves areas with flammable vegetation such as gorse and heather especially vulnerable to conflagrations.

IWT Campaigns Officer, Pádraic Fogarty, said “every year we see the same wildlife wipe-out as hillsides and bogs get torched. It’s devastating not only for the natural environment but for the people who live in these areas as their livelihoods and property are put at risk.”

He called for “greater coordination between the Gardaí, the National Parks and Wildlife Service and the Department of Agriculture to clamp down on this illegal activity.”

A hill fire in #Redcastle, #Donegal this evening... pic.twitter.com/UwF6XDCiFS

The IWT also encourages anyone who sees a wildfire to report it to the IWT in addition to local law enforcement, so that they can keep a comprehensive record of the fires across Ireland. They can be reached via email at irishwildlife@iwt.ie