Irish International Business Network launches the second round of its leadership program and hosts an Irish salon for top Irish festival Inspirefest. 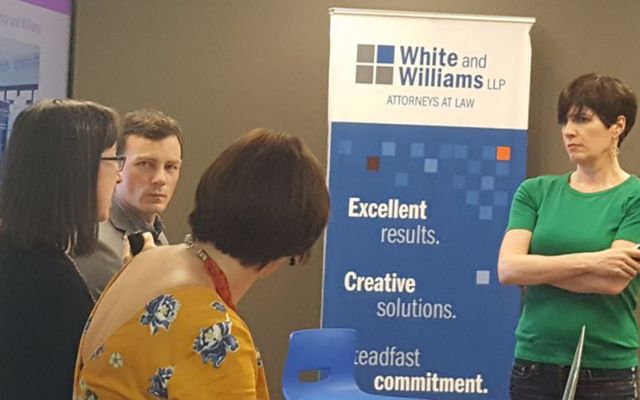 The New York branch of the Irish International Business Network (IIBN) recently celebrated the launch of the second annual LEAP program for Irish and Irish American women while hosting a US salon for popular Irish festival Inspirefest, a unique international festival of technology, science, design and the arts.

Standing for Leadership and Executive Acceleration Program, LEAP was founded last year by Mary McEvoy, Senior Director, Global Procurement at PepsiCo and Susan O’Brien Founder & CEO of Smigin, a language learning company with a unique focus on conversation skills, in order to encourage and support the advancement of Irish and Irish women in their careers through workshops, mentoring, and community-focused projects.

Gathered at the offices of sponsors White & Williams LLP in Times Square, senior advisor on the LEAP program Maura Kelly oversaw a discussion for IIBN members with co-founder O’Brien as well as participants Róisín Mullins and Julie Currid, as the launch of the round of applications for the 2017 program was opened.

Describing the program as “free but competitive,” O’Brien explained how LEAP was concentrated in giving access to women to the resources and people who will help them succeed. An important part of the success of the program, she believes, however, is that the skills they learn are being brought back to the Irish community for the most impact through community-based problem-solving projects with organizations such as the New York Irish Center and the Emerald Isle Immigration Center.

“LEAP is all about promoting diversity and inclusion in leadership. Really putting more women into leadership positions, explained Maura Kelly, a Principal at Purple Mountain Media, an IIBN Board Member, and a senior advisor with LEAP.

Addressing the crowd about their experience participants Mullins and Currid praised the structure of the program and the network of people it opened them up to.

New to New York, Currid, Co-founder of Initiafy, found that LEAP allowed her the opportunity embrace the different type of leadership skills in the US and not just to hear about them but to practice figuring out a problem with the mentors provided.

“I would highly recommend LEAP for any participants that are considering doing that next year and the major reason for that is that it is the perfect opportunity to meet new people and to meet people that are like you, that want to give a little bit back to society and also expand your business network,” she said.

“The program really appealed to me because it was focused on women in leadership and I’d never done any kind of external leadership program before,” seconds Mullis, SVP Program Management at Intuition Publishing Ltd.

“I just thought it would be a really good opportunity to network with peers. To get some insight from mentors. The structure of the program was based on workshops, formal learning and mentoring but also there was an action part of it so we worked with organizations within the community.”

One of the largest focuses of the program was case studies with the New York Irish Center and the Emerald Isle Immigration Center which the participants said inspired them with their passion and hard work.

“Doing well while doing good,” Kelly added as it was explained the ways in with LEAP members looked to improve the branding and mission statements of these crucial organizations for the Irish community to allow them to help even more people.

The main focal point of the evening, however, was a taster for the upcoming Inspirefest that will take over the Bord Gáis Energy Theatre in Dublin’s Silicon Docks on July 6 and 7.

Founded by Ann O’Dea from Silicon Republic, Inspirefest had already sold out salons in Munich, Paris and London before taking to the New York stage on April 27 with contributions from O’Dea herself as well as Domhnaill Hernon Head of Innovation Incubation and global lead for Experiments in Arts and Technology (E.A.T.), Nokia Bell Labs and Monica Parker, Founder, HATCH Analytics who will both be speaking at the main event in July.

With 3,000 people expected to attend the festival this summer, O’Dea explained “we aim at kind of breaking down the silos between academia, industry, entrepreneurs and start-ups. Things like Inspirefest would not exist except for the networks and the relationships and the community that we’ve built up.”

“They say that in your network you always want to have people that are better than you that are pushing you, driving you and when you’re surrounded by so much intellect, so much drive so much innovation and quite frankly inspiration you can’t help but be able to find that inside yourself,” added Parker.

You can view all the highlights from the IIBN Inspirefest New York Salon and the LEAP 2017 launch here:

You can visit the websites of Inspirefest, LEAP, or the IIBN for further information.