Irish you were here - an unexpected adventure in Ireland

"At no point could I have predicted where I would end up... I am lost to a culture that loves storytelling as much as I do. I am lost to Ireland. I love Ireland." 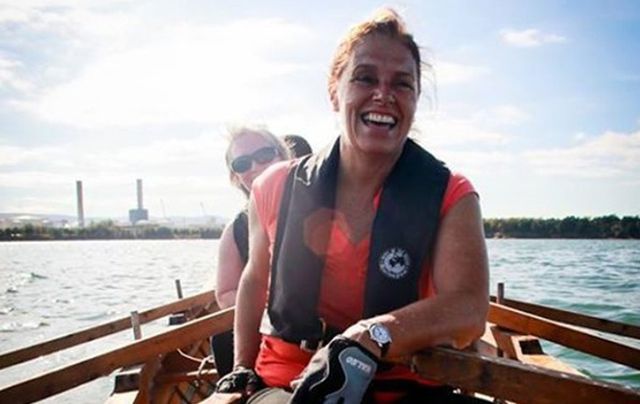 Anne Driscoll rowing a currach in Ireland! Irish You Were Here!

I had no friends, no home, no phone, no car. Aside from a backpack, carry-on and two overstuffed checked bags, what I did have was a US Fulbright scholarship – the golden ticket which gave me permission to work in Ireland for the 2013-2014 academic year and fulfill my longtime dream of living in Ireland.

And in all that paperwork and passport, I had the opportunity to go global as a journalist who had been investigating wrongful convictions for a decade in the US, only to arrive at an office of the Irish Innocence Project on the grounds of Griffith College in Dublin, a former 200-year-old prison where at least one wrongfully convicted man had been hanged. There I hoped to make myself useful and teach the law students working for the Irish Innocence Project how to borrow from a journalist’s toolkit to uncover convincing evidence and prove the innocence of the wrongly-convicted in Ireland.

My life was forever changed.

What follows is a month-by-month narrative as my Fulbright year unfolded, beginning with a Matchmaking festival and a marriage proposal and ending with a mugging in which I ended up mugging my mugger. In between I found friends, drank numerous pints, and had some of the funniest conversations of my life. At no point could I have predicted where I would end up.

I arrived a month ago today in Dublin and in the last month I have laughed so hard it was cardiovascular, I have been inside a 1500-year-old monastery, a Freemason Hall, and a radio studio. I was proposed to by a farmer at the Lisdoonvarna matchmaking festival and have been sung to by several Irishmen. I got an infected thumb from oar splinters while rowing currachs, traditional Irish canvas covered boats at a club on the River Tolka. I have made great and already dear friends, many of whom I row with. I have been to a history lecture, a ceili dance and a comedy show. I have drunk discounted €3 Guinnesses on Arthur’s Day - a completely fake holiday which honors the founder of Guinness breweries - and eaten at Johnnie Fox's three times - a popular restaurant dating back to 1798 which claims to be Ireland’s most famous seafood restaurant but is located atop a Wicklow mountain (the highest pub in the country) and nowhere near the ocean.

I arrived two months ago today in Dublin. And since then, I discovered about myself that I love Love/Hate - the Irish gangland TV series, all the swans that grace the canal outside my deck, and Irish brown bread.

In the last month, I was on TV3 Ireland AM to discuss the Irish Innocence Project, I was ridden around the streets of Dublin on the back of a bicycle, I went to a production of James Joyce’s The Dead in the 1775 house at 15 Usher’s Island on the quay where it was set and moved about the rooms with the 19 actors as if I was part of the party scene and dinner, not part of the audience.

I stayed up until 4 a.m. chatting with two friends and it didn't seem weird or foolish - even after it turned into a pajama party, I made a beautiful beet salad and I rowed with my currach teammates and escorted the SS Hare down the Liffey during a reenactment of the delivery of food to the starving strikers during the 1913 Lockout as people cheered from the banks and marching bands played (it was a 10-mile row).

At work, it was a month of firsts: I helped begin plans for the first ever film festival devoted to wrongful convictions, forge a partnership with an American woman and Irish man both exonerated from death row for killing two cops, now married, living in Galway and hosts to the first ever sanctuary for exonerees, and expand the Irish Innocence Project to include the first journalism student.

I hosted a dinner party for my teammates and served lunch to a friend and the toddler she babysits, and at the suggestion of the "chemist", I cured my infected thumb with a magnesium sulfate paste. I sang my first "party piece" Mercedes Benz, joked and bantered with a Supreme Court Justice, and went to a costume party dressed up like one of The Dubliners wearing a beard and men's trousers, shirt and tie.

I celebrated Samhain, the Celtic Halloween - when it’s believed the membrane between this world and the next is the thinnest - by watching Mummers perform onstage at an Irish Folklore Center benefit and listening to stories about fairy forts and ghostly black pigs told in Irish and English.

In the same day, I climbed the 1250 foot Spinc ridge and the 800-foot Bray Head. The day before that I biked 50K through Phoenix Park and along the Royal Canal during gale force winds.

I have met a meteorologist who cares little about the weather (if it rains, wear a raincoat and, anyway, you’ll dry eventually) but is devoted to yoga, a quarryman who admires my legs and the only state pathologist in all of Ireland.

I understand now that conversation is a currency here more valuable than money and that every conversation – whether it be at a business meeting or in a pub – is laced with wit, humor and fun.

I am lost to a culture that loves storytelling as much as I do. I am lost to Ireland. I love Ireland.

It has been four months today since I arrived in Dublin and in the last month, I got drunk on mojitos with a Supreme Court Justice who still respected me enough the following morning to ask me to read his dissenting opinion on preservation of evidence, which had been issued that day. This country is so small that I’ve met three of the five sitting Supreme Court Justices, although I’ve only got drunk with one.

On my actual birthday, the Irish Innocence Project held its Christmas party which started out in a sophisticated hotel bar called Samsara and ended at 4 a.m. in an infamous late bar and pick up joint called Copper Face Jacks (known simply as Coppers) where groping is de rigueur. Or, in other words, you’re insulted if you do get groped but even more if you don’t. That morning I had to wake at 8:30 a.m. to ride my bike five miles to a dentist appointment and on the way, I thought, “Do I smell like alcohol because I’d really like to make a good first impression?”

I danced in the streets on St. Stephen’s Day in Sandymount going to see the Wren Boys, a traditional Celtic celebration when people dress in masks, straw suits and colorful clothes and sing the song, "The wren, the wren, the king of all birds, On St. Stephen's Day was caught in the furze; Up with the kettle and down with the pan, Pray give us a penny to bury the wran." At some point, I remember being whirled around the street with a leprechaun, which had nothing to do with the two glasses of hot port I drank.

I exhausted my three children dragging them all over Dublin to pull our first pints at the Guinness factory, learn about coopers (barrel makers) at the Jameson distillery, and hear stories of pookas, leprechauns and fairies (or in Irish, si, pronounced she) at the National Leprechaun Museum. We visited the bog men at the National Museum of Ireland, roamed through Malahide Castle which is home to five ghosts, walked along the pier of Howth to see a resident harbor seal and rambled through the deer park to find a dolmen – a 2,500-year-old passage burial.

On New Year’s Eve, Dublin hosted its version of Boston’s First Night, which was billed as the Ultimate Gathering. The year of 2013 was called The Gathering and everyone in Ireland was encouraged to invite family and friends to visit and I realized, that the year of 2013 had concluded with me having my own little Gathering with my kids.

By yesterday, my kids had all returned to America and today, I feel I am missing limbs.

And so, the year turns.

And I have five and half more months of this adventure to go.

* "Irish You Were Here" author Anne Driscoll is an award-winning journalist who received the 2016 Salem Award for Human Rights and Social Justice, was a 2013-2014 US Fulbright Scholar with the Irish Innocence Project at Griffith College Dublin and is the Senior Reporter, since 2006, at the Justice Brandeis Law Project of the Schuster Institute for Investigative Journalism at Brandeis University. She has previously contributed regularly to the "Boston Globe", "New York Times" and "People" magazine, is a licensed social worker in Massachusetts and is the author of a series of self-help books for girls called "Girl to Girl". She has spent the last three and half years living in Ireland. Her name Anne means grace or prayer and Driscoll means interpreter, intermediary or news bearer.

"Irish You Were Here" is available on Amazon here.