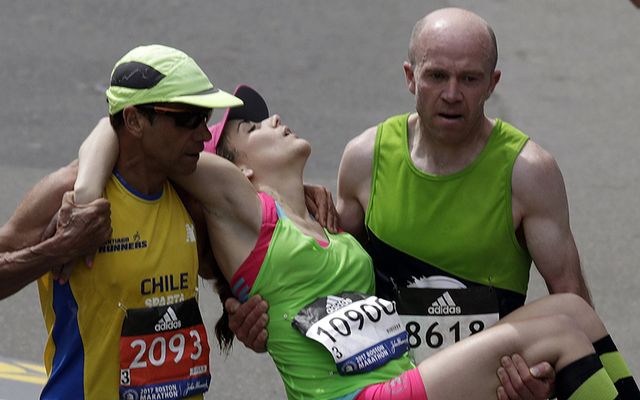 Terry Canning and Mario Vargas carried Julianne Bowe up to the line of the Boston Marathon.

A Northern Irish firefighter is being hailed as a hero for having carried a struggling fellow runner to the finish line of the Boston Marathon, letting her complete the challenge herself.

Crew Commander Terry Canning, from Omagh Station in Country Tyrone, completed the renowned 26-mile course in three hours and 34 minutes, a finishing time he could have improved upon had he not taken time to help a New Jersey runner, Julianne Bowe (28), who was overcome by heat and physical exhaustion.

This was Bowe’s second attempt at completing the Boston Marathon and she returned to the 121st race determined. She told NJ.com “I was so close to the end… It never occurred to me that anything would happen.”

With just half a mile (2,600 feet) of the race remaining Bowe collapsed. The race, from Hopkinton to Boston, took place on a warm day with temperatures reaching up to 79F. As Bowe’s legs buckled under her Canning, along with Mario Vargas from Chile, scooped the woman up and carried her to the finish line. He then let her finish the marathon under her own steam.

The poignant clip of Canning and Vargas’ selfless act has been viewed close to a million times.

Bowe added, “They put me down right before the finish line, and I crossed.

“I must have passed out again right after that."

The New Jersey marathon runner said “I just want to thank them for being so selfless.

"They could have gotten a faster time, but instead they chose to help a complete stranger. That takes a special kind of person."

A spokesman from the Northern Ireland Fire and Rescue Service said, "Well done to our Crew Commander Terry Canning from Omagh Fire Station.

"Terry your actions truly epitomize the essence of Northern Ireland Fire & Rescue Service. You are a real hero at home and away. We are all so very proud of your selfless act. Congratulations on a fantastic finishing time too."

Canning was running in support of the Enda Dolan Foundation, a charitable foundation launched in the memory of an 18-year-old who was killed, during his first term at Queens University, when he was struck by a van in October 2014.

Read more: How she did it: the heroic Irish historian who broke the Tuam baby home scandal