Think you have a bad hangover after St. Patrick's Day? You have no idea! 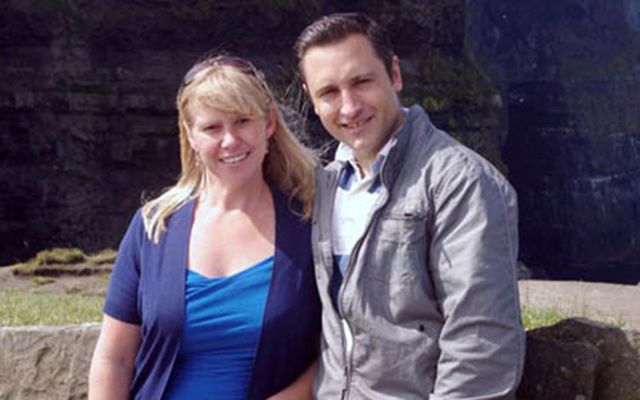 Daniel Clavins, 37, with long-suffering wife Susan. Clavins woke one morning with the hiccups and hasn't stopped since. SWNS

So you thought that you woke up with a bad hangover this morning after the St. Patrick's Day revelry last night? You have no idea how lucky you are to be suffering from just a sore head and a sick stomach (and maybe a case of the fear). In 2012, a Roscommon man woke up with a hangover and a case of the hiccups, and over two years later they still hadn't let up!

Daniel Clavins (37), a father-of-two and telecom software worker, came home after a bachelor’s night out with friends in July 2012, slept and woke up with the hiccups.

He baffled doctors, however, having hiccuped an estimated 5.25 million times over 14 months since that morning, with the affliction just not going away. His condition became so serious that his bouts of hiccups caused him to throw up, pass out, and kept him awake all night. Clavins even underwent an MRI scan as he believed his condition could be due to a brain tumor.

The Roscommon man decided to get a brain scan having read about Chris Sands (29), from Lincolnshire who had the hiccups for three years before his brain tumor was discovered.

Clavins and his wife Susan have consulted with various doctors about this mystery. So far he’s had two endoscopies, a CT scan, changed his diet, taken tranquilizers and consulted a chiropractor, but nothing’s helped.

In 2014, Clavins was finally diagnosed MS and it is believed that this may be responsible. As there is no cure for MS, however, the Roscommon man could be looking at hiccuping for life.

He told the Daily Mail, “They’ve taken over my life. I woke up with them one morning after a stag do and I’ve had them ever since.

“I’ve no idea why they started - I’d had more to drink than I had for some time but it was nothing out of the ordinary, just the usual mix of beer and spirits.

“Some days are worse than others and on odd days they’ll stop, but they can get so bad I pass out or throw up my food.

“There are times when I can’t breathe for 30 seconds because they lock up my diaphragm.

“Nights are bad and sometimes I wake up and the whole bed is shaking because they are so violent and I’ll go to sleep in a different room so Susan can get some rest.

“I’ve learned to control them to some extent and disguise them and hiccup quietly but when I stop thinking about them they start sounding again.

“People find it quite funny when they first meet me but then it becomes quite annoying for someone to have to listen to.”

Clavins has tried everything to try to make them stop. He said, “I’ve tried all the old wives’ tales like eating sugar and vinegar and all manner of supposed cures, but nothing’s worked.

“Last month I had some relief after seeing a chiropractor who manipulated the phrenic nerve in my neck which is connected to the diaphragm.

“They stopped for ten days and I thought I’d finally got rid of them - but then they started again and are as bad as ever.

“I’ve to try to keep cheerful but I’m at the stage now where I’m scraping the barrel for ideas and looking for people to help me.

“The medical community doesn’t seem to know what to do, but it is quite rare.

“I’m told there’s only a handful of people in the world at this moment who will have hiccups as bad.”

His wife, Susan, said, “He’s in a bad way and they are getting him down.

“He’s constantly losing his breath and it’s difficult for anyone to concentrate on anything else when he’s around.

“They can wake me up in the night and I then lie there waiting for the next one and I have to send him out of the room.”

She continued, “We are just desperate to find someone who can help him because the hiccups are ruining our lives.”