The job posting in search of two caretakers to live on Great Blasket Island off the coast of Co Kerry has attracted applications from all around the world. 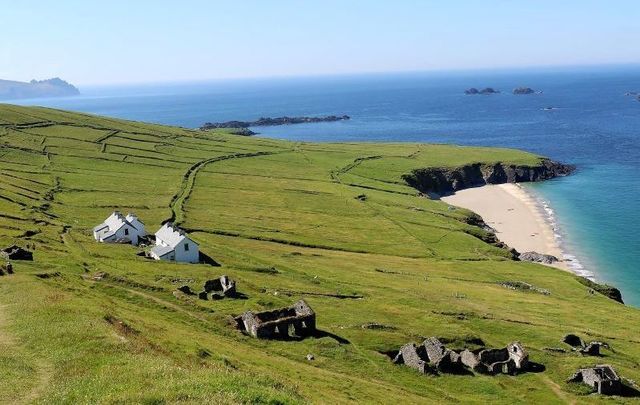 The Great Blasket Island job posting in search of caretakers to live on the Irish island has gone viral attracting more than 24k applicants from around the world, much to the surprise of the job posters Billy O’Connor and his partner Alice Hayes.

Read More: Here’s how you can live on a remote Irish island for free this year

On January 19, O’Connor and Hayes, who own a cafe and three cottages on Great Blasket Island, shared in a Facebook post that they have been blown away by the response their job posting has received.

* Job Update * We are beyond overwhelmed at the response for the Great Blasket Island coffee shop and accommodation...

“We are beyond overwhelmed at the response for the Great Blasket Island coffee shop and accommodation job post.

“Posting the advert last year, we were concerned we would not find ANYONE willing to leave their job, pack their bags and move to a windswept island with no electricity OR hot water in the middle of the Atlantic, off the Dingle Peninsula for 6 months of the year!

“To date we have received over 23,000 applications. (If only we could get everyone who applied to stay for one night, we’d be fully booked for the next 30 years.)

“We had planned to email everyone back when our inbox was at 200 (and were genuinely amazed it even reached 200).

“Again, a huge HUGE thank you to everyone who took time to apply & share or like the post, we can’t explain how much your interest means to us - so sorry if we haven’t got back to you yet, our inbox is chocca block.”

The initial job posting, which was shared on January 8, has received more than one thousand likes on Facebook and has been picked up by international media outlets which tout a “dream job” on the beautiful island off the coast of Co Kerry.

O’Connor told RTE: "I suppose people just want to disconnect from the rush of everyday life and get off the grid. Things are really basic out there. There's no electricity. Cooking is done on gas cookers. Light is provided by candles, heating is a solid fuel stove. There are no creature comforts, no hot showers.”

Hayes said: “I think it’s that romantic sense that you have that disconnect with the mainland.”

O’Connor also spoke about Lesley and Gordon, who served as the island’s caretakers during the 2019 season but opted not to return this year.

"We had a lovely couple working there last year, Lesley and Gordon. They were fantastic and had a genuine appreciation and love for the place. They really took to it."

Lesley Kehoe chronicled the couple’s time on Great Blasket Island on Twitter, and Instagram, which O’Connor believes may have helped spurred the massive amount of applications this year.

However, Kehoe cautioned to CNN: "What you see on social media isn't what it's all about.”

The less glamorous side of the so-called dream job involves "running round the cottages making beds" or "queues coming out of the coffee shop."

"You can easily forget that it gets up to 400 visitors a day," she adds. "it can be incredibly busy.”

O’Connor and Hayes say they have replied to about one thousand of the applications, which have poured in from places including Iran, Finland, and Brazil, and apologize to anyone they don’t get back to.

You can learn more about Great Blasket Island, including how to visit, on their website.

Did you apply to work on Great Blasket Island? Do you think it sounds like a "dream job"? Let us know in the comments!