There have been 17 times when snow fell in Ireland on December 25, Christmas Day, but will there be any more? 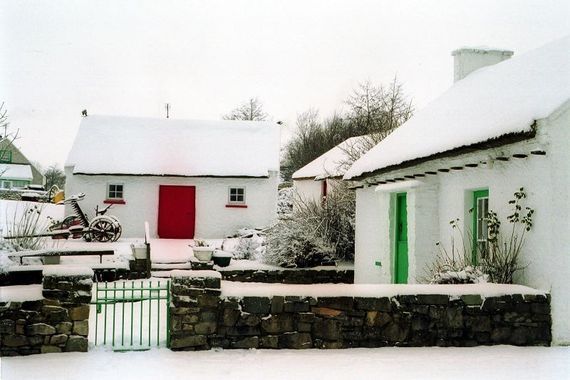 A cottage in Donegal under a carpet of snow. Rolling News

The days of Ireland waking up to a white Christmas are numbered, a leading climatologist has warned.

Professor John Sweeney said the prospect of snowfall on Christmas Day is becoming increasingly less likely every year due to global warming.

To date, there have only been 17 days when snow has fallen on December 25 in Ireland since Met Éireann began monitoring the weather back in 1961.

And, with winters getting progressively warmer and snowfall less likely, anyone dreaming of waking up to a blanket of snow on Christmas morning is destined to face even more disappointment.

However, Sweeney insisted it's not all bad news for lovers of white Christmases, as Ireland will still experience "the odd one" in future years.

The NUI Maynooth-based academic said, "If I were a betting man I wouldn't be putting any money on snowfall on Christmas Day.  It's getting less likely each year.
"But we will still get the odd white Christmas.  It'll just be less frequent than it has been in the past."

Meanwhile, bookmakers have admitted they're lengthening the odds each year on snowfall on Christmas Day, with payouts on festive wagers becoming less and less likely due to climate change.

A spokesperson for Paddy Power said, "The last payout on a white
Christmas occurred in 2001 when we settled all bets placed by punters on snow falling at Dublin Airport on December 25.

"But we leveled the playing field somewhat in 2010 when we saw a flurry of bets on a white Christmas in the run-up to the big day that year, only for the weather gods to pull a Cinderella and make it stop snowing by midnight on Christmas Eve.”

The spokesperson added, "The odds are getting longer every year but betting on a white Christmas is still popular amongst recreational punters."