Philip Mulryne is now a member of the Dominican order. 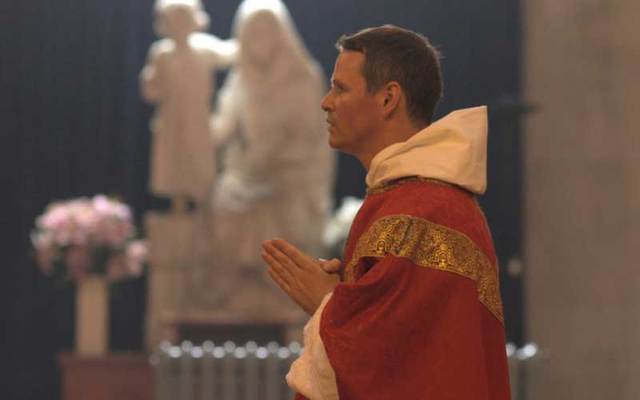 Philip Mulryne, the former Manchester United player and Northern Ireland international who played with David Beckham and Ryan Giggs and earned $600,000 a year, has been ordained a priest. He has taken a vow of poverty.

Father Mulryne, 39, who will be a member of the Dominican order, was ordained by Vatican official Archbishop Augustine Di Noia, OP in St Saviour's Church, Dominick Street, Dublin.

Mulryne, 39, may not have exactly come across as a man of God during his days as a player. He dated model Nicola Chapman and was once sent home from a Northern Ireland squad after breaking a curfew to go drinking. He played 27 times for Northern Ireland.

However, after retiring from professional soccer when he was 31, he dived into charity work and eventually was, apparently, convinced to enter the priesthood by Noel Treanor, currently the Bishop of Down and Connor.

He will be a chaplain at Newbridge College, one of Ireland’s premier high schools for his first posting.

Originally from St. Oliver’s Parish in Lenadoon, Belfast, Mulryne made his name at Norwich City, where he became a fan favorite. He played in 161 games for the club between 1999 and 2005. Mulryne got his start with the Manchester United Youth team, playing with them between 1992 and 1996. There he crossed paths with the famous “Class of ‘92” Man Utd players that included David Beckham, Paul Scholes, and Ryan Giggs.

Mulryne failed to capture the attention of manager Alex Ferguson and made just one appearance for the first team in 1998 before transferring to Norwich.

After further spells in Cardiff City, Leyton Orient and King’s Lynn, he eventually retired in 2008, making the decision to enroll in the Pontifical Irish College in Rome in 2009. His mother Sally Mulryne confirmed the news, which came a shock to many of his former teammates, stating that her son would begin a two-year philosophy degree in Rome, followed by a four-year theology degree before he is finally ordained a priest.

Mulryne himself agreed not to speak about his pursuit of the priesthood until after he was ordained, but he did speak about his decision to join the Dominicans when he made his first profession and received his habit in 2013, after spending a year as a "novitiate" dedicating himself to prayer, study of Dominican history and daily participation in mass.

Following this, the former footballer progressed to three years of Simple Profession and on Sunday began his Solemn Profession, a lifelong vow to the Dominican Order and the last stage before the priesthood. When Mulryne made his Simple Profession, he explains his reasons for joining the order: “This, for me, is one of the main reasons that attracted me to the religious life, to give oneself completely to God through the profession of the evangelical councils, to take Him as our example and, despite our weaknesses and our defects, trust in Him that He will transform us by His grace and thus being transformed, to communicate the joy in knowing Him to everyone we meet.

“This to me is the ideal of the Dominican life and one of the major reasons that attracted me to the order.”

Despite initial surprise at his former Norwich teammate’s choice after retirement, fellow soccer player Paul McVeigh told The Catholic Herald that Mulryne seemed very content and had not taken the decision lightly.

“To my amazement, and most likely to the rest of the footballing fraternity’s, Phil decided to become a Catholic priest,” he said.

“I was still in contact with him and knew that he had turned his life around and was doing a lot of charitable work and helping the homeless on a weekly basis. Still, it was a complete shock that he felt this was his calling.

“I know for a fact that this is not something he took lightly as the training to be ordained as a Catholic priest consists of a two-year philosophy degree, followed by a four-year theology degree and only after that will he finally be qualified as a priest.

“When I arrived in Rome, I was met by a very contented-looking Phil who took me back to the Irish college where he was based…”

Originally from Belfast, Father Mulryne will be assigned to join the chaplaincy team at Newbridge College, Co Kildare.

Philip Mulryne was spotted at 14 by a Manchester United scout while playing for his parish soccer team St Oliver Plunkett.

Impressing at his following trial for the club, he eventually joined the youth squad of the club before ultimately signing a four-year professional contract after finishing secondary school in 1994.

However, joining the team alongside David Beckham, Paul Scholes and Andy Cole he was unable to secure a regular place in Alex Ferguson's side.

After Manchester he went to Norwich City where he was reportedly earning up to €600,000 a year, playing 135 times for the club. There were also short spells at Cardiff City and Leyton Orient.

He played 27 times for Northern Ireland and scored three goals.

In 2005 he was suspended from the squad for a breach of discipline and missed two World Cup qualifying games. Mulryne also previously dated model Nicola Chapman.

After retiring from football in 2009, Fr Mulryne studied philosophy and theology before entering the Dominican novitiate house in Cork. He became a deacon last year.

Archbishop Di Noia, Assistant Secretary of the Congregation for the Doctrine of the Faith, came from Rome to deliver the homily: "After mature deliberation, dear Brother Philip, you have shown your readiness to embrace the service to which you have been called.

"Whatever gain you had, you have counted as loss. In a real sense, your experience as an athlete has helped to prepare you for this moment: you have known the meaning of working hard to attain a goal, and now the goal is Christ," he added.