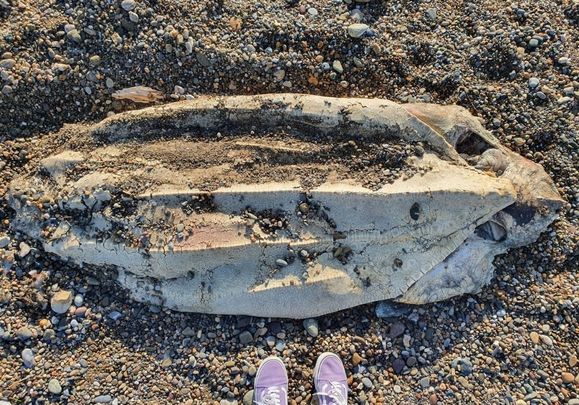 The remains of a rare sea turtle have been found on a popular Waterford beach.

A passer-by spotted what is believed to be the remains of a leatherback sea turtle on Tramore Beach in Waterford on Monday morning.

The turtle's body is badly decomposed and covered in stones, suggesting that it was washed onto the beach.

Marine science Ph.D. student Lucy Harding posted images of the remains on Twitter and said that the turtle measured approximately 6-7 ft in length.

Harding said that it was said to see that the "magnificent creature" was dead but added that it was fascinating to observe it up close on an Irish beach.

Went down to check out the suspected #leatherback turtle remains on #Tramore strand, Co. Waterford. Approx. 6-7ft long, quite decomposed. Sad to see a magnificent creature dead but so interesting to observe up close & on an Irish beach #turtlestranding #turtleresearch pic.twitter.com/Lor2so2W0r

Leatherback sea turtles are the largest of all living turtles and can reach weights of up to 600kg.

They have been listed as critically endangered, with populations falling from over 100,000 during the 1980s to approximately 25,000 today.

Several rare turtles have washed up on Irish beaches in recent years.

In November 2019, the badly decomposed remains of a leatherback sea turtle measuring 162cm in length washed up on Ardmore Beach in County Waterford, while a loggerhead turtle known as "Julius Caesar" was rescued from a beach in Donegal in January 2019.

The endangered turtle was barely alive and suffering from hypothermia when he was found two-and-a-half years ago and was recently flown to the Tarifa Wildlife Recovery Centre in Gran Canaria, Spain.