The Dingle-based Cun Na Mara trawler caught the elephant tusk that researchers believe may have come from a slave ship that sunk more than 300 years ago. 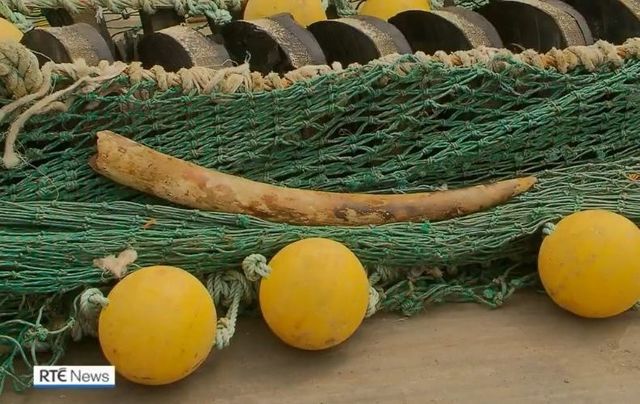 The elephant tusk that was netted by the Cun Na Mara trawler off the coast of Co Kerry. RTE News, Twitter

An elephant tusk recovered off the coast of Co Kerry by an Irish trawler may have originated from a sunken slave ship.

Crew onboard the Cú Na Mara trawler discovered the tusk around 120 miles off the coast of Dingle while trawling for prawns.

The crew initially thought that the tusk belonged to a mammoth and brought the tusk to marine biologist Kevin Flannery, a director at the Dingle Oceanworld Aquarium.

"When they were trawling for prawns they picked this thing up and they were wondering what it was," Flannery told the Irish Examiner.

"Initially everybody assumed they might be from a mammoth, but they were identified as elephant."

Strangely enough, this isn't the Cun Na Mara's first encounter with an elephant tusk. The Skipper, an Irish and UK fishing magazine, reported in November 2020 that the crew came upon another tusk around the Porcupine Basin:

Unusual catch for trawler crew The Crew of the Dingle based Cu Na Mara had an unexpected find after a recent haul when...

For the more recent discovery, Flannery consulted with several experts, including Dr. Connie Kelliher of the Parks and Wildlife Underwater Archaeology Unit, to identify the origins of the tusk.

Kelliher later concluded that the tusk originated from a slave ship that sunk in the Porcupine Basin off Kerry while carrying slaves to England or the USA.

"I contacted Dr. Connie Kelliher of the Parks and Wildlife Underwater Archaeology Unit, she's an expert in this, and she came and looked at it, and said to me that she thinks it’s from a slave ship that would have gone down off the Porcupine in extreme bad weather," Flannery told RTÉ News.

There are numerous accounts of a slave ship traveling from Guinea to England which sank off the coast of Kerry in 1701 during an Atlantic storm. Remnants of the ship have since washed up near Courtmacsherry in Co Cork.

Flannery told RTE News: "They carried, obviously, ivory from the slaughter of elephants and they would have carried a cargo of humans as well for sale as they did with the slave trade."

He separately told The Kerryman newspaper: "It's ironic that such a thing turns up in a week when racism and man's inhumanity to man from so-called powerful, first world nations begins to show itself up. It just makes us more aware of what was done in the name of humanity."

The National Museum of Ireland is currently examining the tusk to identify where and when it originated from.

Experts say an elephant tusk recovered by a Kerry fishing vessel may have originated onboard a slave ship bound for England or America. The unusual find made by the crew of a Dingle-based trawler could date back to the early 18th century | https://t.co/lKqWFmSywX pic.twitter.com/H1sl3CgB5s