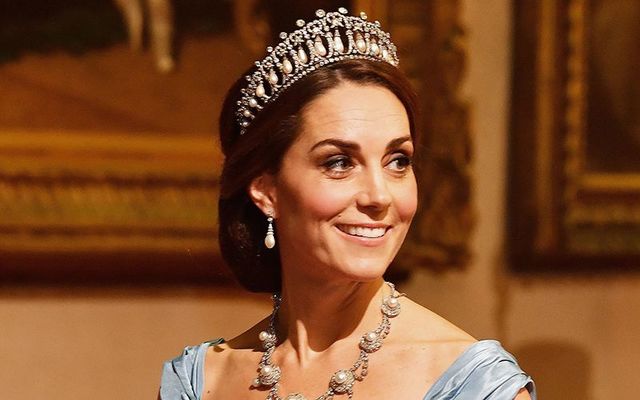 Duchess Kate honored Princess Diana at a state dinner this week when she wore a tiara that belonged to her late mother-in-law.

The Cambridge Lover’s Knot tiara which Duchess Kate wore was presented as a gift to Princess Diana on her wedding day in July 1981. It was originally made in 1913 by Queen Mary, grandmother to Queen Elizabeth.

The sparkling tiara is understood to have been a favorite of Princess Diana.

At the state dinner on Tuesday, Duchess Kate was joined by her husband Prince William as the royals welcomed King Willem-Alexander and Queen Máxima of the Netherlands.

British Prime Minister Theresa May was also in attendance.

The Duke and Duchess of Cambridge accompany State Visit guests, including Prime Minister Theresa May, to The Netherlands State Banquet held in the Ballroom at Buckingham Palace. pic.twitter.com/1aMGtemN0I

Both Duchess Kate and her late mother-in-law Princess Diana have Irish roots; Kate can trace hers to Irish legend Brian Boru, while Princess Diana’s great-great-grandfather was from Co Cork.

Read More: Friendship between Princess Diana and an Irish nun comes to light

At the state dinner, Queen Elizabeth wore the Girls of Great Britain and Ireland tiara, as well as the Cullinan III and IV brooch.