Ireland’s first-ever animated neon sign has been restored to its former glory for the first time in 13 years. 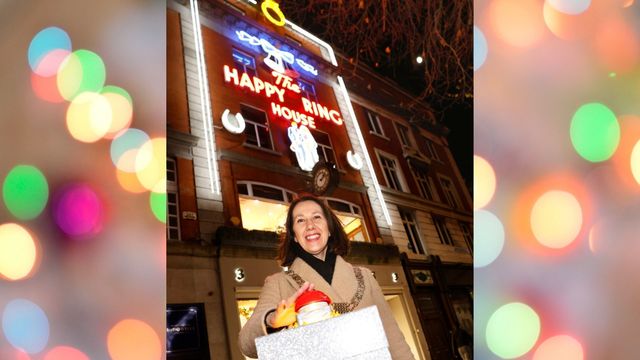 The iconic McDowells Happy Ring House sign on Dublin’s O’Connell Street has been given a new lease of life thanks to a grant partially funded by Dublin City Council.

It was created and erected in 1952 by sign experts Gaelite – and 69 years later, the firm was called back to restore it after it fell into disrepair in 2008.

The restoration project began in September, involving the removal of existing neon tubing for testing to use as templates for replacement manufacturing, before sections of the letters and symbols where rust had caused damage, were re-soldered or replaced.

The lights were officially turned on by Lord Mayor of Dublin, Councillor Alison Gilliland, who said the Council is determined to bring O’Connell Street back to its former glory.

“I’m delighted to see the ‘Happy Ring House’ sign return to its iconic status too,” she said.

“I know lots of couples will have many fond memories of seeing it down through the years, and I hope many more happy memories can be created there in the future.”

Nicola McDowell, a grandniece of former boss Jack McDowell, is still involved in the day-to-day running of the store.

The luxury and designer jewelers plan to expand a new watch store next door at Number 4, which will almost double the retail space.

It also plans a new transactional website, allowing people all over the world to purchase a gift from McDowells.

“McDowells Jewellers are pleased to be part of the future of O’Connell Street’s rejuvenation,” said Managing Director, Chris Andrews.

The company expressed it thanks to Dublin City Council for helping to facilitate the grant - and the Lord Mayor's support in bringing the iconic sign back to working condition.