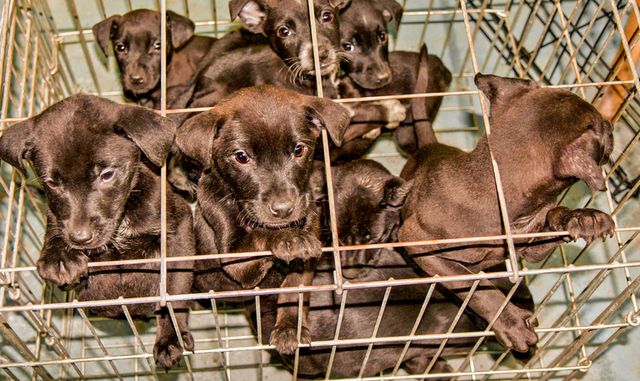 A Dublin man has defiantly admitted to breeding and exporting pugs to Britain knowing they are then sold on to Asia as part of the dog meat trade.

The man, known simply as Gerry, was a caller on 98fm’s 'Dublin Talks' with Adrian Kennedy during a discussion about the cruelty of greyhound racing when he admitted to the breeding and selling of Chinese pugs to an associate in England, who in turn sold the dogs as part of the dog meat trade in Asia.

The caller was unfazed by questions put to him by the show's presenter. He stated clearly that he was not ashamed by his business dealings. Each time Gerry sells a pug he makes €300 ($350). What happens to the dogs afterwards is not his concern, he asserted.

Puppy mill's are rampant in Ireland, exporting animals all over Europe and beyond

“What I do for a living is I breed pugs, Chinese pugs, and send them over to England. I get €300 a pup. I meet the other guy and he sends them off to Asia. I don’t know [if they’re sent to be eaten] but I think they are because it’s always the Chinese pugs they want.

“I think it’s because they’re fatter. I’m not ashamed of myself. It’s business. They’re out of my hands. It’s the other guy and it’s nothing to do with me. I get €300 a pup off him and he does his own business with them.”

Also involved in the discussion was activist Nicole Matthews from the Irish Council Against Blood Sports. She was appalled by Gerry’s blasé approach to his “business.” “We have become known as the puppy mill capital of the world, and certainly Europe at this stage, for the trafficking of puppies and over breeding of puppies. I have no words for that.”

Greyhounds are being exported and mistreated worldwide

In May 2016 Robert Green, the owner of Banteer Schooling Track, Co Cork, attempted to export 24 greyhounds to Macau before authorities at Heathrow Airport in London turned them away due to the poor conditions of the crates in which the dogs were traveling in.

The Irish government has been coming under increasing pressure from animal advocate groups in Ireland to fix the outdated laws on the exporting of Irish greyhounds and limit the countries which they can be exported to.

Suzie Carley, Executive Director of Dogs Trust Ireland, said the government needs to do more to stop the illegal trade and export of dogs from Ireland. "Our main concern is that welfare standards are appropriate to ensure the protection of greyhounds and that they are being adhered to. Changes are required to current legislation in order to safeguard the well-being of all greyhounds."

In March 2017 Independent TD Tommy Broughan proposed the Welfare of Greyhounds (Amendment) Bill 2017 in conjunction with Dogs Trust Ireland during a Dáil meeting “to provide for the control of export of greyhounds and for the publication of a white-list to which the export of greyhounds under license would only be permissible.”

Dogs awaiting their fate at a festival in Asia

The dog meat trade across Asia has been receiving increasing public condemnation for many years with major animal rights and welfare groups campaigning against the practice. Each year China hosts the largest dog meat trade gathering in the world at the week long Lychee and Dog Meat Festival in Yulin.

Here dogs are boiled alive and skinned in front of onlookers before being sold to the general public. After initial reports from Chinese officials suggesting that the festival would not take place during 2017 it went ahead as usual.

Is it past time for the Irish Government to step up and clamp down on illegal animal trade?