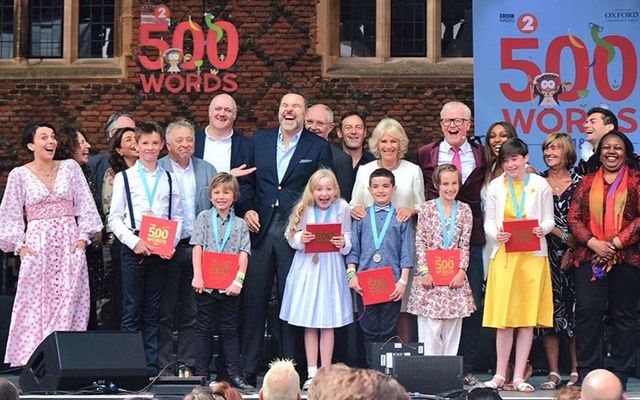 A nine-year-old boy from County Down brought tears to the eyes of judges at the 500 Words creative writing competition final at Hampton Court Palace in Great Britain.

Hosted by the Duchess of Cornwall, finalists in the short story competition were invited to attend a special recording of the BBC Radio 2 breakfast show with BB2 presenter Chris Evans on the grounds of the palace.

Read More: Irish girl inconsolable when she finds out she wasn’t invited to the Royal wedding

The nine-year-old said his story was inspired by his grandmother and a robin he noticed one day on his way to school, the Belfast Telegraph reports.

“I don’t really remember my granny. She died when I was very young,” he said.

The #500words competition winners join The Duchess of Cornwall and @achrisevans for a drive around Hampton Court Palace on Chitty Chitty Bang Bang pic.twitter.com/bkGQZ8bWTq

His story was read aloud at the palace by Jim Broadbent. Fionn, who is a fan of the Paddington movies, in which Broadbent stars, said it was “really great” that the actor read his story.

The young competition winners, who came from all over the Great Britain, were served cake make by Great British Bake Off winner Candice Brown and received rides in the Chitty Chitty Bang Bang car, chauffeured by Chris Evans.

Congratulating all the children who entered the #500words competition, The Duchess said: “I want to encourage everyone here to keep reading, to keep writing, and to keep saying a big fat ‘yes’ to adventures.” pic.twitter.com/Cj0YILXHSo

The Duchess of Cornwall has supported the short story competition as an honorary judge for the past four years.

Read More: Most famous Irish royal couples of all time

In a speech, Camilla said: “I know that all of you here understand the pleasure of stories. They light up our imaginations, touch our hearts and get our brains whirring.

“I want to encourage everyone here to keep reading, to keep writing, and to keep saying a big fat yes to adventures.”