The female Rottweiler was left abandoned for more than seven hours earlier in December. 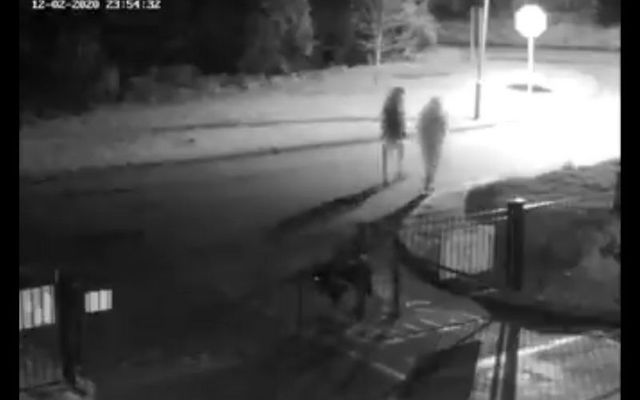 Dogs Trust urged people to contact the charity if they could no longer care for their pets. Dogs Trust Twitter

An Irish dog rescue charity has posted a disturbing video that appears to show two people abandoning a sick dog by tying it to a gatepost in the dead of night.

Dogs Trust, a Dublin-based rescue charity, posted CCTV footage of two people abandoning a female Rottweiler outside the main gates of the charity's main compound in Finglas near midnight on December 2.

The footage shows the dog watching its presumed owners disappear as they round the corner and then cuts to seven hours and 39 minutes later, when the dog is found by a Dogs Trust worker.

The dog was observed to be lying on the ground in the second video and appears to be very friendly and affectionate toward Eimear Cassidy, the Dogs Trust staff member who found her.

Following the abandonment of Beau, a female Rottie in urgent need of veterinary care, outside our Rehoming Centre, we are reiterating our appeal for people to please contact us if they are struggling with their dogs.
Read more here: https://t.co/AMYh9ecyEd pic.twitter.com/DqlzedJVnt

"She was immediately friendly and very pleased to see me, which made it even more upsetting when I reviewed the CCTV footage and saw she had been abandoned just before midnight," Cassidy told the Irish Times.

Cassidy said that she "burst into tears" when she realized that the dog, who has been since named "Beau" by Dogs Trust, had been forced to sleep outside in the cold all night.

Cassidy also pointed to the fact that there was an emergency contact number on the very gate that Beau was tied to.

However, it wasn't until Cassidy brought the dog inside that she realized just how bad the situation was.

Tumors were hanging from Beau's undercarriage, Cassidy said, while the dog's head appeared to be tilting to one side.

Veterinarians at Dogs Trust examined the Rottweiler and observed that she had an untreated chronic ear condition that was causing her head to tilt. The charity has also sent samples of the dog's tumors for laboratory analysis to determine if they can be treated.

However, the charity is concerned about her condition.

As a result of her poor health, Beau is currently not up for adoption while Dogs Trust attempt to determine the extent of her illness.

The charity is calling on people who can no longer look after animals to contact the center, rather than abandoning them.

"We are not here to judge you and we will do our utmost to help you, whatever your circumstances are because we want to avoid cases like Beau happening in the future," Becky Bristow, executive director of Dogs Trust, told the Irish Times.